Moose give up two goal lead, fall 3-2 in OT to Senators

A recap of the Moose OT loss. 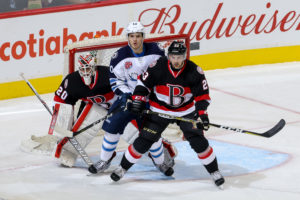 After losing in a 5-round shootout on Friday night, the Moose had a shot at redemption with the Belleville Senators in a Halloween-themed Saturday night match-up.

About halfway through the 1st, Mike Sgarbossa opened the scoring for the home team off a fluky backhand goal from the slot, which deflected off one or two defenders and trickled in. Just over a minute later, Peter Stoykewych took a pass from Mason Appleton and beat Danny Taylor far side with a Mark Messier style wrister from the top of the circle (except this one was through a screen). Later in the 1st, Buddy Robinson broke up a play at his own blueline and went in on a clean breakaway, but wasn’t able to beat Taylor. The first period ended with the Moose up 2-0, with 24 shots attempts overall (20 at even-strength).

Just 26 seconds into the period, Michael Hutchinson left a brutal rebound in the slot and Ben Sexton pounced on it and chipped it just under the crossbar. Later on, Mike Sgarbossa undressed a defender and was in all alone but ran out of room. The teams traded a few chances thereafter, but the rest of the second was scoreless. The Moose had another 20 shot attempts in the second period – all at even-strength

Hutchinson made several good saves to keep the Moose up by 1, but with 2:55 left in the third, Gabriel Gagne blasted a one-timer from the high slot which beat Hutchinson on the blocker side. The Moose didn’t have a shot attempt in the last 5 minutes of the period.

A Jack Roslovic giveaway in the offensive zone led to a breakaway for Filip Chlapik, who tucked in a forehand deke just past Hutchinson’s outstretched pad. The Moose finished the game with 39 shots, and 59 shot attempts.

-With a primary assist on the Stoykewych goal, Mason Appleton continued a 5-game point streak; he has 1 goal and 7 assists over that stretch. He also had 2 shots on goal, and a takeaway

-With 2 assists, Buddy Robinson now has a 4-game point streak, with 4 goals and 4 assists; he also had 3 shots on goal, and and two takeaways, including one which created a breakaway

-Rookie winger Cam MacLise – playing on the 4th line with Jansen Harkins – led the Moose with 5 shots on goal, including a great chance from the slot

-Michael Hutchinson stopped 34/36 in regulation, but gave up the game winner in OT; the game was a roller coaster for Hutch, who had a shaky start in the first, was excellent in the second half of the game, but couldn’t stem the tide of momentum late

Wednesday, November 1st, in Bakersfield, California against the Oilers farm club, the Condors.