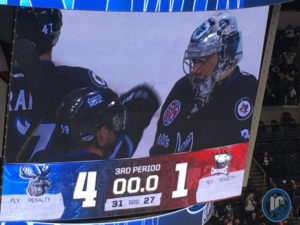 After losing in OT in their first post-Christmas game on Friday, the Moose renewed acquaintances with the Charlotte Checkers in a New Years Day matinee at the MTS Centre. It was Brandon Tanev second AHL game, and Ondrej Pavelec’s first start since December 17.

Moose Goal (1): After J.C Lipon threw a bouncing puck towards the slot, Patrice Cormier batted the puck high past Michael Leighton for the game’s first goal.

Moose Goal (2): On the PP, Brendan Lemieux walked the puck to the net, fed Jimmy Lodge in the slot, then collected the rebound and banged it home.

Moose Goal (3): After a nice rush up the ice by Brandon Tanev to gain the zone, the Moose cycled the puck until it came back to Tanev, who shot it through traffic and beat Leighton.

Moose Goal (4): Brain Strait carried entered the zone and dropped it back to Quinton Howden, who passed the puck through a broken stick to Scott Kosmachuk, who easily beat Leighton.

G – Ondrej Pavelec: Pavelec made a few great saves early in the game to keep things scoreless, then kept up his solid play as the Moose took control of the game. He looked big, calm, and confident in the net, and was one of the keys to the game for the Moose, despite not being selected as one of the game’s 3 stars.

F – Brandon Tanev: A speedy player at the NHL level, Tanev is a blur against AHL competition. He also has a lot more confidence carrying the puck at this level, and making plays in the offensive zone. He showed that on his goal today, carrying the puck effectively in the neutral zone, helping to establish the cycle, and firing a puck through traffic that found twine. This stint in the AHL may be a great opportunity for him to become a little more dynamic, and perhaps add a touch of offence to the pugilistic role he’d been playing in the NHL.

F – Kyle Connor: With Jack Roslovic away at the World Juniors, Connor is certainly the focal point of the Moose attack. A smooth skater who is known more for his shot, the 20-year-old left winger had a number of great set-ups today, including a beautiful saucer pass to spring Kichton one-on-one with Leighton, and another pass to De Leo in the slot (who hit the post). Connor is exactly where he should be right now, playing top line and PP minutes with the Moose, and gaining back the confidence he displayed through a dominant college season in 2015-2016.

F – Jimmy Lodge: Lodge is looking more and more assertive with the puck as time goes on. Last season, he was playing hot potato every time he touched the puck, never controlling it for more than a second at a time – now, he shows patience with the puck, including a sneaky play today where he waited for the goaltender to get out of position (Leighton actually fell down), then circled and found Lemieux in the slot (though a defender blocked the shot). He also set up another near goal – Dan DeSalvo in the crease. At 21, Lodge is beginning to regain the type of status that goes along with being selected in the 3rd round of the NHL Entry Draft.

F – Brendan Lemieux: He made a few nice plays in the offensive zone today, including setting up Lodge in the slot, which led to his rebound goal. While he has good hands around the net, and is very good at tipping pucks, he needs to start showing more offensive ability at the AHL level – he currently sits at 5 goals and 4 assists through 28 games – if he hopes to play an offensive role at the next level.