After taking 3 of 4 points from the Charlotte Checkers over the weekend, the Moose played host to the Toronto Marlies. After a solid game on Sunday (saved 27/28), Ondrej Pavelec got his second straight start in goal. 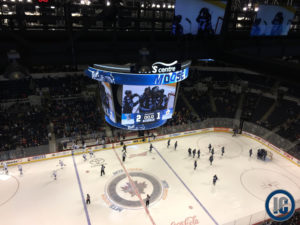 Moose Goal (1): Scott Glennie and Chase De Leo came in two-on-one, and Glennie slid the puck smoothly over to De Leo, who finished blocker side to put the Moose up 1-0.

Marlies Goal (1): Andreas Johnsson threw the puck at the net and it deflected off Colin Smith and past Ondrej Pavelec.

Moose Goal (2): On the powerplay, Jimmy Lodge set up in the high slot and beat Sparks high blocker on a very accurate slap shot.

*Strait was hurt early on.

G Ondrej Pavelec – He kept the Moose in the game in the first 25 minutes, stopping the first 18 shots he faced before the Moose were able to get on the board. That included a brilliant glove save off a rebound in tight. He stopped 34 of 35, and was certainly the difference for the Moose tonight, earning 1st star honours.

F Chase De Leo – A great play to bury Glennie’s pass off the rush for the game’s opening goal. On some nights, De Leo skates particularly well, and this was one of those nights. De Leo needs to get back some of the confidence he had to end last season, and when he does, more points will come. He has 15 through 27 games this season.

F Jimmy Lodge – He made another great skilled play tonight, beating Sparks on a great slapper from the high slot. (Like a few Moose players, he also took two penalties tonight). No Moose player has made more progress in the past 12 months than Jimmy Lodge – on January 3rd of last year, Lodge had no points through 15 games; as of today, he has 6 goals and 7 assists in 27 games, including a 4-game point streak (1G, 3A).

F Kyle Connor – A quiet game for Connor – he didn’t have the puck that often, and didn’t make a big impact. Still, he looked dangerous on the PP, where he likes to set up on the right half wall (his off-wing), wait for a cross-ice pass, and snipe back-door on unsuspecting goalies.

F Brandon Tanev – He made a tremendous play while short-handed, putting the puck through a defender’s legs and nearly beat the goalie five-hole. He also blocked a few point shots on a late Marlies PP to help preserve the win.

F Ryan Olsen – In his first game since being called up from the ECHL, he took a boarding penalty early in the first, then immediately took a slashing penalty after returning to the ice. He didn’t play much after that. He’s in the last year of his entry-level deal, and  the prospects of earning another NHL contract are looking slimmer as time goes on.

F Brendan Lemieux – Channeling his inner Ryan Olsen, Lemieux also took two penalties – a slashing call, and goalie interference (though it was a bit marginal). He also passed up a tremendous scoring chance, opting to pass it to Kevin Czuczman, who was in a less dangerous spot. It wasn’t a strong showing for Lemieux, but that’s often how it goes for a first year pro.

D Nelson Nogier – A decent showing tonight, the rookie stood out at times for his good defensive play – with his size (6’3), reach, and skating ability, he’s pretty adept at separating opponents from the puck. Offensively, he has a long way to go, as he has a bit of Mark Stuart’s tunnel vision, where only one option is considered, and the option chosen (to shoot) doesn’t look like a choice, but more of an automatic reaction that couldn’t possibly have gone any other way. That said, he has 6 points through 26 games, which is as many as he had in his WHL draft year back in 2013-2014.