I joined Mitch Peacock up in the booth to provide colour analysis of the game this afternoon so it was a tad difficult to be taking notes to write up a game recap. 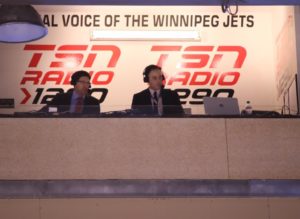 However I can tell you that the almost 9000 fans in attendance were treated to a fun afternoon as they were transported back to 1996 as Manitoba went retro.  I even dug up the original Manitoba Moose magazine from that inaugural season:

In the theme of going retro how about this: Ice Breaker the official magazine of the Manitoba Moose of the IHL. Should be a good one today. pic.twitter.com/K3u6DnuRA4

The intro video was pretty slick:

ICYMI – Yesterday was Retro Jersey Day! Here’s the great intro video that was created for the game. #GoMooseGo pic.twitter.com/mwSQC4WP2O

Here are the highlights from the game:

Missed Retro Jersey Day? We have all the highlights from today’s game vs. Toronto! #GoMooseGo pic.twitter.com/umWxpZ1HPl

Both teams had plenty of chances throughout the game although no player is likely feeling as snakebit as Brenden Kichton.  He had two really good chances to get his first goal of the year, including in the 3rd period where he clanked it off the crossbar.

Instead the Moose are now winless in five (0-4-1) including four straight losses as their playoff hopes (if they had any left at this point) took another big hit.  They will look to rebound on Tuesday night in a re-match with the Marlies.

Following the game players and coach Vincent broke down the contest:

“I love playing in a game like that.” – Ryan Olsen on tonight’s back and forth affair. #GoMooseGo pic.twitter.com/o5p3CNampc

“I’m proud of those guys tonight.” – Kevin Czuczman on his team’s effort this afternoon. #GoMooseGo pic.twitter.com/DhhCcpS1Kq

“We fought hard for pucks.” – Pascal Vincent on today’s game vs. the Marlies. #GoMooseGo pic.twitter.com/W0mD87kXaF

I will be joining Mitch back up in the booth on Tuesday night for the re-match when these two face off with a 7 pm puck drop.