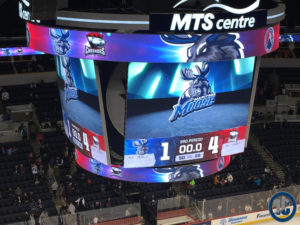 The Moose took on the Charlotte Checkers in a rematch of last night’s 4-3 loss at MTS Centre. Coming into the game, the Moose sat 3rd last in the AHL’s Western Conference, a full 8 points behind the Iowa Wild (8th place) despite having played two extra games. Points were of the essence.

In spite of their desperate place in the standings, the urgency was translated to the ice. The Moose got out to a 3-0 deficit in the first, before Kyle Connor gave the team some hope, scoring on a breakaway with just 23 seconds left in the opening frame. The Moose made a push in the second period with 18 shots on net, but there weren’t enough quality chances among them. Charlotte scored about 5 minutes into the third and that put the game to bed. Despite having 50 shots in the game, the Moose didn’t have that many quality chances tonight.

Checkers Goal (1): After a terrible giveaway by the Moose in their own zone, Lukas Wallmark turned and fired, catching Eric Comrie off guard. Worse, the goal came while the Moose were up a man. 1-0 Checkers.


Checkers Goal (2): Brenden Kichton stopped a dangerous shot/pass but the puck squirted away from him andcame back to Dennis Robertson, whose rebound came to Andrew Poturalski at the side of the net; Poturalski – a rookie with 42 points in 57 games – was in a good spot to shoot, but instead found a wide open Connor Brickley, and Brickley found the gaping net.

Checkers Goal (3): A Trevor Carrick point shot, appeared to deflect off a Moose defender in the slot, capping off 3 goals in just over 10 minutes to start the game. Eric Comrie was pulled.


Moose Goal (1): Kyle Connor picked up a loose puck just outside his zone and burst through the middle on a breakaway; he was pursued by the defender, but shielded the puck well, made a nice backhand-forehand move and beat the goaltender blocker side just over the right pad.

Checkers Goal (4): A Charlotte two-on-one – all too common on this night – was finished beautifully by Andrew Miller, high glove.

– Eric Comrie was pulled for just the third time this season in 41 starts. He wasn’t very good yesterday, and he was worse today. While it isn’t easy playing behind the Moose defence, playing 20 of the past 23 games might also be taking a toll. Jamie Phillips wasn’t overly busy in relief, but filled in admirably, making a few good saves to keep the score less objectionable.

– Kyle Connor ended his 1-game goalless streak with his first period markers. That brings him to 11 goals in the past 8 games. With 3 shots in the first, 2 in the second, and 2 in the third, he could have had a few more. He was clearly the best Moose player tonight.

– Jack Roslovic was the Moose’s all-start selection this winter, and the team’s best skater for most of the year until Connor came on fire; he’s been quiet in the last few games, but came alive a bit tonight in the third period, gaining separation with puck and generating a few high quality chances in the slot.

– Chase De Leo played last night’s game, and starting today’s game on right wing alongside Jack Roslovic. Both he and the line weren’t effective, and Vincent shifted him back to centre where he looked more comfortable.

– Scott Kosmachuk had a nice burst of speed tonight, getting around the defender and going hard to the net. Overall, his Jekyll and Hyde tenure with the Moose continues – he is at times dominant, often disturbingly silent, with very little in between.

– There were a few more Nelson Nogier sightings in the offensive zone tonight. Moose defender Kevin Czuczman noted last night that the coaching staff is encouraging the D to jump up in the play, and Nogier is starting to embrace that style. We’ll see if the results follow.

The Moose’ will dawn retro uniforms this Sunday at 2 pm vs. the Toronto Marlies.