Recap of the Moose and Stars game.

The Skinny: The 21-21-3-2 Moose played host to their divisional rival, the 23-19-3-2 Texas Stars. The Moose were fresh off a 3-2 comeback victory over the Stars on Saturday, a huge win given that their playoff quest depends on catching the four teams ahead of them, including the Stars. After his recent call-up, rookie goaltender Mikhail Berdin got his first start in goal in 2019. 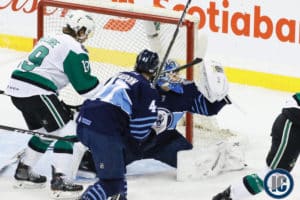 The first two periods were scoreless, although the Moose hit a few posts, including a great pass by Seth Griffith which was tipped in front by a pinching Tucker Poolman.

Manitoba Goal: After Seth Griffith beat out an icing call, Marko Dano picked up the puck and made a spinning backhand pass out front to Logan Shaw, who went forehand backhand and beat Philippe Desrosiers to give the Moose a 1-0 lead.

Manitoba Goal: Seth Griffith got an empty-netter to all-but seal the game with 1:47 to go.

The win gives the Moose a ten game streak at home as they have now gone 9-0-0-1 at Bell MTS Place.

#23 Michael Spacek – struggling a bit of late, Spacek didn’t have a great game today. He  didn’t generate many chances, and made a few questionable decisions with the puck. Case-in-point: at one end of the ice, he made a good play by anticipating a defender’s pass and picking it off, but he shot the puck over the net, then later gave the puck away at his own blueline, almost causing a 2-on-1 (if not for the play being offside). He can play better, and chances are he will.

#26 Jansen Harkins – seemingly a different player than earlier this season, Harkins continues to contribute in a top-6 role, when only a few months that seemed like an unlikely possibility. His quickness is much improved, and he’s able to take the puck to dangerous areas of the ice almost at will, when before his first two or three steps were a bit sluggish. Hands down, he’s the most improved forward on the team from day 1 of the season to now. He has 9 goals on the season, and 5 of those have come in 2019.

#43 Skyler McKenzie – his usual self, speedy and tenacious, throwing all of his 165 pounds around, and generating scoring chances in limited ice-time. He scored goals in back-to-back games coming into today, and has 6 goals on the season. Mark these words, he will be a big offensive contributor for the Moose down the road.

#3 Tucker Poolman – the de facto number 1 defenceman on this team, Poolman has been a rock on many nights, and was good today. He did make a mistake or two early in the game, but was very good as the Moose started to turn the tide in the middle of  the 2nd period. He looks calm and in control out there, contributes offensively, and plays big minutes in all situations. There’s nothing left for him to prove at this level – he’s ready to play on the Jets’ third-pairing.

#7 Logan Stanley – his game today is probably best termed inconsistent. He made a few great plays to break up incoming zone entries with his stick, but also gave the puck away two or three times. On the plus side, his confidence is growing, and he’s able to do more with the puck today than he was willing or able to do in October. Con – his growing confidence is sometimes leading to those giveaways by holding onto the puck a bit too long. It’s a learning process for Stanley, who’s only 44 games into his pro career. There’s no question that he’s making progress, and his season thus far has been more successful than many of the naysayers would expect. He’s contributing offensively – 10 points in 44 games is decent production for a rookie defenceman given how little the Moose score (they are last in the AHL with 119 goals), has 82 shots on goal, and is playing top-4 minutes without looking out of place.

#36 Nelson Nogier – another quiet outing for Nogier, whose simple, steady approach rarely hurts his team. He skates well and has good size, but he doesn’t have the skill to contribute much on offence, or in transition, which limits his impact almost entirely to the defensive zone. That said, with captain Peter Stoykewych hurt, and Sami Niku with the Moose, he’s a valuable defender for the Moose as he plays in a top-4 role at even-strength and the penalty kill.

#40 Mikhail Berdin – if you haven’t seen him play, you’re missing out. He was excellent today, making all 34 saves for his first AHL shutout. Not only is he a good goaltending prospect, but he’s one of  the most exciting goalies to watch. With long legs and incredible athleticism, he brings highlight-reel save possibilities to every game. He’s also incredibly active in his net, loves playing the puck, and likes to add a little pizzazz to his saves whenever possible. He ended the day with AHL stats as follows – a 4-2-1 record, 2.37 G.A.A, and .932 save percentage.

In the third game of a six-game home stand, the Moose will play host to the Chicago Wolves Wednesday, February 13 at Bell-MTS Place.