The Moose took on the San Jose Barracuda at Bell-MTS place on Sunday afternoon, in a rematch from the previous day. The Barracuda brought the home team back down to the earth in that game, handing the Moose their first regulation loss since November 12. Despite the loss, the Moose still woke up this morning first in the division by 11 points, first in the conference by 9 points, and 4 points ahead of the Providence Bruins for first overall in the AHL. 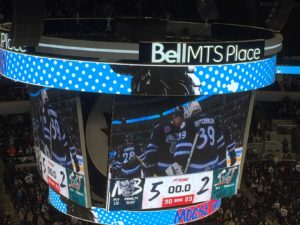 Moose Goal (1): On an early powerplay in the first, Sami Niku slid the puck across to Michael Spacek at the left point, and he fired a one-timer low blocker side on former Toronto Marlie goaltender, Antoine Bibeau.

Moose Goal (2): Mike Sgarbossa wrapped it around the net and fed Chase De Leo in front, and he chipped it high blocker side past Bibeau.

The Moose won the shots battle in the first, 12-4

Barracuda Goal (1): After a terrific pk by the Moose, Michael Hutchinson let in a stinker – a lazy shot from the corner. However, he also knocked the net off as the puck went in. The goal was reviewed and stood. Hutchinson had a few words for the referee following the review.

Barracuda Goal (2): With most of  the Moose huddled and out of position on the right boards, Adam Helewka was left all alone in front and beat Hutchinson five-hole to tie the game.

Moose Goal (3): On the powerplay, Chase De Leo took a pass from Buddy Robinson and fired a quick, low shot which snuck past Bibeau.

Moose Goal (4): Peter Stoykewch walked the line, fired a shot on net, and the puck took a bounce in front off Buddy Robinson and found its way in.

Moose Goal (5): On a 5-on-3 powerplay, Nic Petan blasted a low one-timer from around the right faceoff dot to put the Moose up 5-2 with just over 6 minutes left in the third

The Moose next play on Friday, January 5th – a road game in Chicago against Vegas’ farm club