A look at the Moose practice today at the Bell MTS IcePlex. 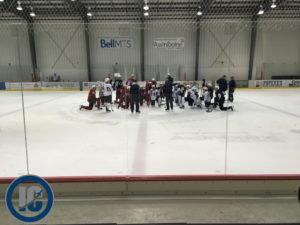 Some players hit the ice earlier than the 10 am start time but once the practice got underway most were present and accounted for including Julian Melchiori who had been assigned back to Manitoba by the Jets this morning.  The only player I noticed was missing was Jansen Harkins.  During practice the Moose tweeted out that he had been assigned to their ECHL affiliate Icemen.

“This is not an unusual reassignment” said coach Vincent on sending Jets 2015 2nd rounder Jansen Harkins to the Icemen of the ECHL.  “We want him to play minutes, we want him to develop and to be able to use our East Coast hockey team and for him to play minutes, important minutes is crucial in his development and that is the plan.”.  The coach added “He is going to get back up. We have a plan in mind. It’s not that he was sent down and if he performs and he’s piling up some points that he is going to get called up.  No, that is not the case. He is going to play a certain number of games and we are going to call him back up and he knows all about it.”

Getting Eric Comrie back:

“It’s huge” said the Moose bench boss on the return of goalie Eric Comrie back into the fold.  “He’s a hard working guy.  He pushes the pace in practices just in the way he does work.  To have him around the team and to be ready to go is just a great option that we have.”

With the team playing four games in five days starting with back to back games on Friday/Saturday the plan is to split the games between Comrie and Hutchinson.

Francis Beauvillier left practice early today and coach Vincent indicated that while he doesn’t yet have an update, the Moose forward is “already at the doctor’s and we should know more in a few hours.”

Moose have a morning skate at 9:30 AM on Thursday in advance of a pair of road games this coming weekend in Chicago (Friday) and Iowa (Saturday).