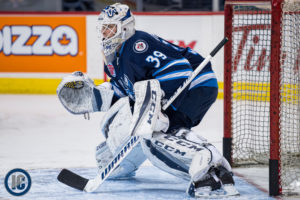 It has been quite the season in the AHL for Michael Hutchinson as he picks up his second consecutive AHL Goalie of the Month award.

The Manitoba Moose, in conjunction with the American Hockey League, announced today goaltender Michael Hutchinson has been selected as the CCM/AHL Goaltender of the Month for December.

Hutchinson, 27, is the first goaltender since Matt Murray in 2015 (Feb./March) to capture two straight CCM/AHL Goaltender of the Month awards. The Moose goaltender posted a 6-1-0-1 record in eight appearances this month while recording a 1.62 goals against average and a 0.946 save percentage and one shutout. Hutchinson allowed two or less goals in six of his eight starts through the month and began December earning a point in six straight starts. The Barrie, ON native was named the CCM/AHL Player of the Week for the period ending Dec. 27.

In recognition of his achievement, Hutchinson will be presented with an etched crystal award prior to an upcoming Moose home game.