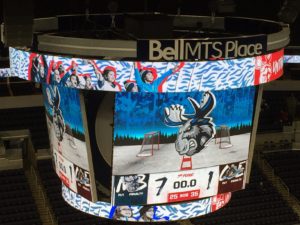 After a brief, three game road trip, the Moose came home to Bell MTS Place to take on the Cleveland Monsters, farm club of the Columbus Blue Jackets.The Manitoba Moose came into tonight’s game with an incredible 7 game winning streak, and were winners of 11 of their last 12.

On the powerplay late in the third, Nic Petan slid a pass back to Sami Niku, who fed it over to Michael Spacek at the top of the left circle; Spacek one-timed it just over the right pad of goaltender Brad Thiessen to put the Moose on the board with just 10 seconds left in the first.

Midway through the second, Chase De Leo had the puck at the bottom of the left circle and was looking to make a pass through the slot; instead, his pass bounced off a defender and in, putting the Moose up 2-0.

The highlight of the night tonight came on the third goal: Nic Petan had the puck just over the Monsters’ blueline and fed a nice behind the back pass to a streaking Mason Appleton; Appleton came in hard down his off wing (the left side), cuts in assertively and put the puck just over the right pad of Thiessen to give the Moose a comfortable, 3-0 lead.

Just 46 seconds later, a fluky backhand shot from the slot deflected off Jan Kostalek and over a baffled Michael Hutchinson to get the Monsters within 2.

Just a minute after the Monsters got on the board, After Brendan Lemieux battled for a puck in the high slot, and Buddy Robinson came storming down main street, picked up the puck and went high glove past Thiessen to restore the 3 goal lead.

Just 41 seconds later, Julian Melchiori took a harmless wrist shot through traffic which found twine. That caps a stretch of 4 goals in 2:27, and 5 goals for the Moose on just 16 shots to this point.

Just 1:07 into the third, Peter Stoykewych faked a shot from the point, walked into the high slot, and beat Thiessen on a wrister, low glove. 6-1 Moose early in the third.

With the Moose victory all but secured at this point, Petan came over the Monsters’ blueline and fed it to Mason Appleton, who faked a shot, rounded the net confidently and passed it out front to Jack Roslovic, who buried on a startled Brad Thiessen, the victim of a touchdown against on 25 shots.

– Mason Appleton turned in one of the best performances by any Moose player this season – 1 goal and 2 assists, and 5 shots on goal. He had 3 scoring chances himself, and mostly importantly created 5 scoring chances for his teammates tonight. (The most for any Moose player this year at home). After going scoreless in his first 4 AHL games, Appleton now has 22 points in his last 19 games – 8 goals, 14 assists . He sits second in AHL rookie scoring, with #1 Dylan Strome recently called up to the big leagues (Arizona). He is also tied for 4th in scoring, among all AHL players.

– Jack Roslovic had 2 more points tonight – 1 goal, 1 assist. He has 26 points on the season (12 goals, 14 assists), and is tied for 2nd in AHL scoring with the aforementioned Dylan Strome

– With an assist tonight, Brendan Lemieux has 15 points through 12 games; last season, he had 19 points in all of 61 games

– Michael Spacek scored his second goal of the year, and first on the powerplay. He’s starting to see more PP time of late, and if that trend continues, the numbers will come along with it

– The Moose have now killed off 23 straight penalties

Saturday night at Bell MTS Place in a rematch with Cleveland.