Note:  Probably more important than any hockey news today, is news that it is 7-11’s birthday, which mean’s a free slurpee while supplies last.

Vancouver Province: Tanner Glass excited about opportunity with the Jet.  Glass self assesses himself as a 4th line left winger & staple on the 2nd line PK. We would agree with him on that. The Jets are certainly stockpiling a lot of forward depth, so you can be sure that if a player doesn’t show up effort-wise, he will have a view from the press box the next game.

Winnipeg Sun:  Searching for the real Andrew Ladd.  Will the former Hawks now playing for the Jets help rekindle the rivalry we once held with the Canucks?  Time and re-entry to the West for the 2012-13 season will give us an indication of that, but for now here’s some info on the Jets captain.

Winnipeg Free Press:  Players cup hosted by Jonathan Toews.  If you want to know what’s going on this week, here is a schedule of events.  While not directly Jets related, they are having  a “white-out” on Day 3, where “players and fans are encouraged to wear white in a show of support for the NHL’s return to Winnipeg.”

Denver Post:  Avs still not at cap floor.  Not even mid July and already fans are worried.

News & Observer:  Canes’ Murphy will take his shot.  Looks like Carolina got a very good player in the 12th spot.

NESN:  Dougie Hamilton enjoying up-tempo practices.  The Bruins are very happy that they got him when they did. 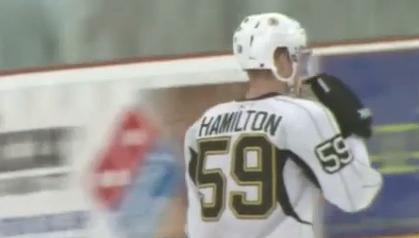