Mathieu Perreault set to play in 600th NHL game; calls decision to sign with Winnipeg Jets “best decision I ever made for my career”

The veteran NHLer is set to play in game 600 tonight. 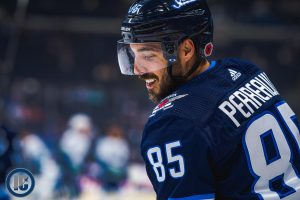 When the Jets take to the ice tonight in Nashville one of their forwards will be hitting a major milestone as Mathieu Perreault will play in Regular Season Game #600 of his career.  Perreault has done pretty well for himself as a sixth round pick of the Washington Capitals back in 2006. After playing five seasons in Washington. Perreault moved on to the Anaheim Ducks organization for one season before signing with the Winnipeg Jets as an Unrestricted Free Agent back on July 1st, 2014.  A decision he said today was the “best decision I ever made for my career”.

Here is what #85 and Coach Maurice said about the milestone today in Nashville:

Perreault on signing with the Jets and reflecting back on his career.

Coach Maurice on the contributions of Perreault.