Marko Dano claimed off waivers by the Colorado Avalanche 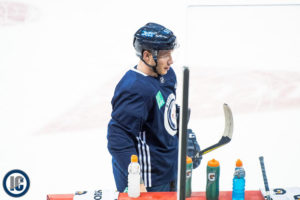 Marko Dano was placed on waivers by the Jets yesterday and today the news broke via Bob McKenzie of TSN that he is off to division rival Colorado who put in a claim for the former Jets forward.  Dano played just 23 games last season for Winnipeg scoring twice and adding one assist spending the majority of the season in the press box.  He had a solid preseason with Winnipeg but with the return of Nic Petan to the lineup the organization decided to make him available.  Now he is off to Colorado to play for the Jets division rival.

Dano was originally a 1st round pick (27th overall) back in 2013 by Columbus and he came to the Jets as part of the Andrew Ladd trade back in 2015-16.  His best season with Winnipeg was in 2016-17 when he played 38 games with four goals and seven assists.

The Jets play the Avalanche at Bell MTS Place on November 9th so that would be the first time we may see Dano back or if he ends up playing with the Colorado Eagles of the AHL on December 30th and 31st.