A recap of the Moose OT win.

The Skinny: The 8-8-1-0 Moose played host to the 11-3-2-1 Iowa Wild, Minnesota’s AHL affiliate. This veteran Iowa club crushed the Moose in their first two games of the season, 4-1, and 8-1. Cam Schilling returned to the Moose lineup after missing 5 games with an injury, while Logan Shaw made his home debut after being signed to a two-way NHL contract by the Jets on November 11th. 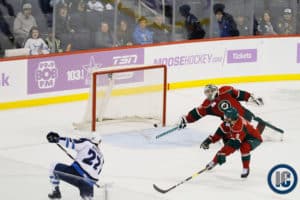 Manitoba Goal: Less than a minute after a Ryan White goal was called back due to an alleged high stick, Seth Griffith entered the Wild zone on his off-wing, centred the puck, and amidst a mad scramble in front, Logan Shaw poked it past C.J Motte. 1-0 Moose.

Iowa Goal: After Eric Comrie kicked out a rebound far to his right, Mitch McLain picked up the puck and found the gaping net to tie the game at 1, with under a minute left in the first.

Iowa Goal: After the puck was flipped high in the air into the Moose zone, Wild 2016 1st round pick, Luke Kunin got behind Luke Green and went five hole on Comrie to put the Wild up 2-1 late in the second period.

Manitoba Goal: A seemingly harmless point shot by Tucker Poolman took a crazy hop and bounced over Motte’s glove to tie the game at 2.

Iowa Goal: Another harmless point shot – this time blocked by a Moose defender – immediately found its way onto the stick of Gerry Fitzgerald, and he beat an out-of-position Comrie to restore Iowa’s 1-goal lead.

Manitoba Goal: Just seconds after a Cam Schilling shot rang off the bar and out, Emile Poirier deflected a point shot by Peter Stoykewych to tie the game at 3.

Manitoba Goal: Michael Spacek carried the puck into the Iowa zone, drew all the eyes towards himself, and found Appleton wide open with a beautiful seem pass, and Appleton ended this with a quick snap of the wrists. It was their second game-winning OT combination this year (the other being October 30th vs. Milwaukee).

#20 C.J Suess – a ‘200-foot player’ who works hard and has good hands in tight, Suess had a quiet night tonight with 2 shots on goal and no particular plays of note on either side of the puck. He’s been among the team’s top-2 centres for most of the season, and has become a go-to player, particularly on the powerplay where he’s an important net-front presence. With 6 goals in 18 games, the rookie is second on his team in goals behind last year’s AHL rookie of the year, Mason Appleton.

#23 Michael Spacek – a slick, undersized pivot in his second AHL season, Spacek’s calling cards have been his work on the powerplay, where he boasts good vision, and an excellent one-timer from the left point. He made  the key play of the game – a beautiful set up to Appleton for the OT winner, as well as a secondary assist on the tying goal. He carried the puck confidently tonight, both on the winning, goal, and earlier in the game, where he was able to gain possession on the powerplay in the offensive zone. and handling the puck very confidently.

#26 Jansen Harkins – he’s oscillated between centre and wing all year, but has spent most of his time on left wing in the middle-6. His speed and tenacity on the puck seems to be improving, which will be a key for him if he hopes to take his game to the next level. He showed some energy early in the game, and had a few good shifts with good puck possession down low.

#27 Mason Appleton – the offensive leader of this team, Appleton leads the Moose in goals (8), assists (9), and points (16). He has size, speed, and hands, which makes him great for the possession game, and has the vision to create plays, and the shot to finish them too. He wasn’t particularly good (by his high standards) through regulation play tonight, but he was in the right place at the right time in overtime, and finished the game off perfectly. Now in his second AHL season, he just needs to continue his seasoning in the AHL, gaining confidence, and getting stronger in order to prepare himself to play a north-south game one day in the NHL.

#43 Skyler McKenzie – a small bundle of energy, this 5’8 winger has spent most of the season on the fourth line, but he’s made the most of his opportunities. Considering a complete absence of powerplay time, 3 goals and 3 assists in 14 games is good production for a bottom-6, rookie winger. His speed and skill are obvious, but his impressive physical play has come as a surprise, especially given how much size and weight he’s giving up going into every corner. He didn’t get a lot of ice time in this game, so there aren’t any takeaways on his play tonight.

#3 Tucker Poolman – the top defenceman currently on the roster, Poolman is lugging big minutes in every situation, and is helping stabilize his pairing with young Logan Stanley. He was rewarded with a goal today off a harmless point shot – his 5th point in 13 games. His hockey sense and anticipation are the keys to his success, as it helps him prevent zone entries, and break up plays. His offensive game isn’t dominant, but his all-around play is likely to translate well to his NHL future.

#7 Logan Stanley – despite one gaff midway through the game that created a breakaway against, Stanley was otherwise good on the defensive side tonight. He’s playing big minutes at even strength and on the penalty kill alongside Tucker Poolman, and he also had at least shot attempts tonight, including 2 shots on goal. He’s already come a long way just two months into the season, as he looks more well adjusted to the pace of play than he did in the opening weeks of the season.

#45 Luke Green – it was a tough night for Green tonight. He was on the ice for two goals against, and in both cases, he was partially (or wholly) at fault. The Kunin goal was one of that he’d like to have a redo, as he let Kunin blow past him after misreading the play. He also got walked with a flashy deke earlier in the game, but without scoring repercussions. You can see the skill and skating he possesses, but he’s still adapting to the pace of the AHL.

#1 Eric Comrie – a solid game for Comrie tonight – goals 1 and 3 were beyond his control, while the second goal was a breakaway that he had a shot at but wasn’t necessarily at fault. He helped stem the tide in the second and third, making a number of saves at times where the Wild were gaining momentum. He moves his record on the season to 6-4-1, with a 3.08 GAA and .908 save percentage.