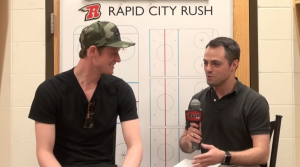 The Moose have added 25 year old goalie Adam Carlson to the mix. Played 45 games last season in the ECHL with the Rapid City Rush. The Minnesota product was undrafted, signed by the Capitals in 2016.  This added to the goalie depth in the organization with Mikhail Berdin expected to be up in the AHL with Eric Comrie (who as of this post remains an unsigned RFA).

Here is a good article about the newest tender in the organization.

Sounds like a well spoken young man.  You can listen to his exit interview from last season with Rapid City.