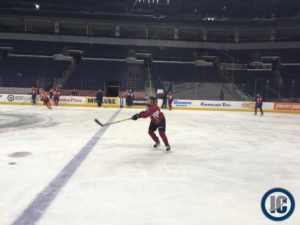 The Moose were on the ice this morning at the MTS Centre for an optional morning skate as they get ready to take on the IceHogs including newest member of the squad Jake Kulevich who was signed on an ATO after his collegiate career ended with the Colgate Raiders of the ECAC in the NCAA.  He won’t play tonight as he had a bit of a journey to get to Winnipeg but he spent some extra time on the ice this morning getting acclimatized to his new teammates.

We did learn that Brendan Lemieux could be done for the season although he is still being evaluated according to the Moose bench boss.  Coach Vincent also said he didn’t expect Brandon Denham to play this season but said “its not impossible if the recovery goes better than expected”.  Last up on the injury front it also doesn’t sound good for Winnipegger Scott Glennie as coach Vincent indicated “I’d be really surprised if he comes back this year.”.

We also had a chance to chat with the newest member of the Manitoba Moose the aforementioned Jake Kulevich.  The left shooting Colgate University product stands 6’3″ and was the captain of his squad this past season finishing with six goals and 16 assists in 37 games.

Manitoba Moose forward Brendan Lemieux out with LBI; could end season
IceHogs get the 2-1 shootout win over Moose