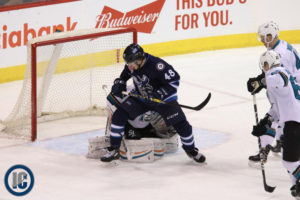 Following skate today coach Vincent provided us with an update on the health status of Moose forward Brendan Lemieux:

“Lower body.  Going for investigation.  I think it’s going to be more on the longer term than the shorter term myself but I’m not a doctor.  We still don’t know yet.”

When asked if the injury to Lemieux could knock him out for the season coach Vincent said “Its not impossible”.  The Moose have 13 games remaining with their regular season ending on April 14th.

The injury occurred in the 2nd period of the game this past Wednesday when he got tangled up with the Marlies Colin Greening along the boards.

In 61 games for Manitoba the rugged winger has 12 goals and seven assists for 19 points along with 130 penalty minutes (most in the AHL).  He has been heating up of late scoring three goals in his last five games.