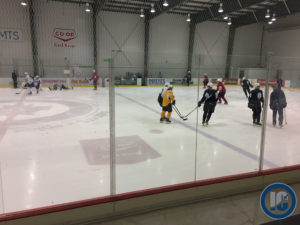 The Moose held their final home practice of the regular season as they will leave for the concluding three-game road trip to end the 2017-18 regular season.  It will be an important trip because despite clinching a playoff spot last weekend the team can control their own destiny if they have a good showing on the road.  The Central Division is beyond tight as the Wolves sit in 1st with 89 points (1 game in hand), the Moose/Griffins in 2nd/3rd with 88 points and the IceHogs in 4th with 86 points.  Manitoba plays Thursday and Friday against the Monsters (7th in central) in Cleveland before concluding the regular season with the Wolves in Chicago on Sunday in a game that could have massive playoff implications.

Handing out the Hardware:

Yesterday it was announced that Moose bench boss Pascal Vincent had been named the winner of the Louis A.R. Pieri Award as the AHL’s outstanding coach and today rookie defenceman Sami Niku was named the winner of the Eddie Shore Award as the AHL’s outstanding defenseman. That is a fairly significant achievement, one that has only been accomplished one other time by a rookie in the 60-year history of the Award.

The Moose had five players out of the lineup due to injury last game including Cormier (concussion), Petan (concussion), Melchiori (concussion), Kostalek (UBI) and Beaudoin (broken jaw).  Manitoba captain Patrice Cormier was back in a regular jersey for practice today and is expected to return to action on Thursday.  Nic Petan, who wore a yellow-non contact uniform today, will be on the road but it is uncertain as to whether he will be playing.  Julian Melchiori who has been out since February 25th (around 17 games) also with a concussion still has no timetable as to his return.  Jan Kostalek was back in a normal uniform today.  Charles-David Beaudoin is still recovering from the incident that broke his jaw in a game against the Stockton Heat back on March 24th.

Sticking to the basics:

After dealing with some injury issues that seemed to hamper him earlier this season Chase De Leo has broken out offensively with Manitoba adding two goals and three assists for a team that can use additional scoring. Asked if he noticed the results coming from doing good things “When you stick to the basics, stick to the game plan, you respect the system. I feel like good things happen and everything falls into place”. De Leo has matched his career high in assists with 21 which he also achieved in his rookie campaign back in 2015-16.

New face on the squad:

Moose signed Jets prospect Jordy Stallard to an ATO and while he hasn’t cracked the lineup yet he is getting some experience practicing with his new squad.  “It’s my goal next year to play pro and I guess this is just the first step of it.  Right now I’m just trying to soak everything in learn from the older guys and the veterans  and just take it all in.”  The Jets would need to offer him a contract by June 1st but he isn’t worrying about that “That’s kind of out of my control right now.  I did all I could in the regular season and in the playoffs. I’m just trying to come here and do my best.  Like I said that is out of my control.  Obviously I’d like to sign a contract, that’s my goal, but I just gotta come here and work as hard as I can”.