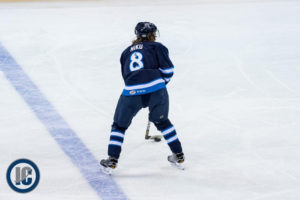 We have been documenting the success of Jets 2015 7th rounder Sami Niku all season long.  The dynamic skating Finn playing in his first professional season in North America has used his smooth-skating and next level offensive abilities to really take his game to the next level this season for the Jets farm club.

In 73 games he has 53 points (16G 37A) for the Moose which is good enough for third among all rookies, tops among rookie defenders and second in the entire AHL among defencemn in scoring.

Last week he was named to the AHL All-Rookie team which he followed up a day later by being named to the AHL First All-Star Team.  He was also voted co-Rookie of the Year for the Manitoba Moose and best defenceman on the team following the conclusion of the final home game this past Sunday.  When I spoke to him after the game and asked what it meant to him to be named best defenceman on the team he jokingly said “That my defence, it’s not so bad”.  Well it is clear that they are noticing outside of Winnipeg as well as the AHL announced today that Niku had won the Eddie Shore Award for outstanding defenceman in the AHL.

We caught up with coach Vincent and Sami Niku following today’s Moose skate at the IcePlex to discuss.