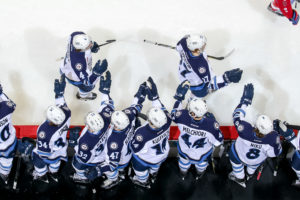 The Manitoba Moose have had themselves quite the week as have a couple of their prospects. Jack Roslovic had a four point night on Friday in a 6-4 win over Chicago while Mason Appleton added two apples that game. He followed this up with a two goal one assist performance on Sunday afternoon in a 5-2 win over Laval.

From the AHL release:

The 2015 6th rounder was originally expected to head back to Michigan State for his third year this season and had even been named captain of the Spartans.  However, he instead chose to turn pro and was assigned to the Moose during Jets training camp.

In 18 games with Manitoba he has five goals and 11 assists for 16 points.  This has him third in AHL rookie scoring and tied for 17th overall in the AHL scoring race and within striking distance of the top 10.