Peluso likely done for the season. 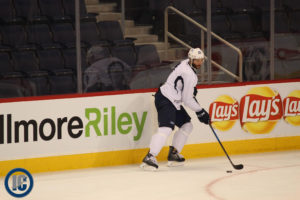 Anthony Peluso hasn’t been in the Moose roster since January 1st and post-game I asked Moose coach Pascal Vincent about his status.  The Manitoba coach confirmed “he had surgery and he’s probably out for the rest of the season.  If he comes back before the end of the season I am going to be surprised.  But its something that he had to get done.  He tried to play with it for awhile but it got in the way too much.  Anthony is a good soldier, he wanted to keep playing, but it got to a point where the pain was too high.  So we probably lost him for the rest of the season.”

In 22 games with the Moose this year he had two assists.