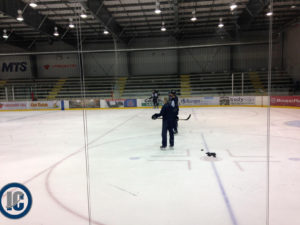 Just before Development Camp we get some Moose additions to the coaching staff.

Eric Dubois, 46 has spent the last three seasons as an assistant coach with the Rimouski Oceanic in the QMJHL. He has spent 11 years coaching in the QMJHL including six years as a head coach with Acadie-Bathurst from 2011-13 and four seasons with Baie-Comeau 2005-09. Dubois, who calls Rimouski home, started his QMJHL coaching career as an assistant with Baie-Comeau in 2004 following a 12-year professional playing career with stops in the AHL, IHL, CHL and professional leagues in Europe. Dubois was a defenceman with the Manitoba Moose in their inaugural 1996-97 season in the IHL where he appeared in 80 games and scored 25 points (8G, 17A).

Mark Morrison is entering his sixth season as an assistant coach with the Jets’ AHL affiliate. He was in St. John’s for five years prior to moving with the team to Manitoba last season. The 53 year-old native of Delta, BC, was head coach of the Victoria Salmon Kings from 2006-11. Morrison was originally drafted by the New York Rangers in the third round, 51st overall, in the 1981 NHL Entry Draft. In 1981, Morrison was named as a member of the Team Canada squad that captured the gold medal at the World Junior Championship. He was also the captain of the 1982 team that captured the bronze medal.