A breakdown of the Moose 4-1 loss to Bakersfield looking at the players and include post-game audio. 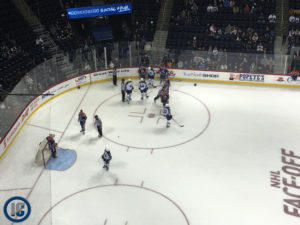 The Manitoba Moose fell 4-1 in their home opener to the Bakersfield Condors (AHL Edmonton). The Moose played well in the first, coming out with a 1-1 tie, but were unable to generate much sustained pressure in the latter two periods, or stop the Condors’ tandem of Jujhar Khaira and Taylor Beck, who combined on two key goals.

(1) Bakersfield Goal: An unbelievable individual effort by Taylor Beck – a spin-around, back-hand pass through his feet to Jujhar Khaira who chipped it into the top of the net.

(1) Manitoba Goal: An almost equally impressive play by Marko Dano – behind his back, between-the-legs pass right onto the stick of Scott Kosmachuk who wristed it an open net.

(2) Bakersfield Goal: A giveaway by Nelson Nogier leads to a chance by Scott Allen from the left faceoff dot – it’s a blistering wrist shot through a slight screen which beats Comrie short-side in the top-left corner.

(3) Bakersfield Goal: Another connection between Taylor Beck and Jujhar Kaira, this time breaking in two-on-one – Beck fired it cross-ice to Khaira, who went to the net unprovoked and deflected the pass behind Comrie.

(4) Bakersfield Goal: A giveaway by Scott Kosmachuk at the offensive blueline leads to an easy empty netter.

He made a few great saves early, including a big pad save on a breakaway to bail out Brian Strait, and a nice glove save on a dangerous two-on-one. He was beaten three times, but it was hard to fault him on any of the goals – a great individual effort on the first, a partial screen on the second that had eyes, and a net-front deflection. Overall, he made all the saves he should have, but was only able to take away a few of the tough ones.

Prominent around the front of the net all game, he made a fantastic behind the back, through the legs, back-door pass to Scott Kosmachuk for a PP goal. He was very good on the forecheck, strong on the puck all night, and was the most consistent Moose player on the ice tonight.

He was slick on the forecheck, using quick hands to create a few nice takeaways. He was noticeable throughout the night, especially on the powerplay, and seemed to be buzzing in the offensive zone more as the game went on.

He was dangerous early with the puck on his stick – such a smooth skater who always keeps his head up. However, he made several mistakes in the second half of the game, fell a few times, and was weak in the defensive half of the ice. Overall, stuff that’s pretty typical of a teenager playing just his third game of pro hockey.

He was ok today – he made a nice play around the net on the PP, almost scoring on a deflection. He also got into a scrap in the third period and cross-checked a guy in garbage time which caused a bit of a scene. Head Coach Pascal Vincent complimented his game during post-game interviews.

Copp had an incredibly quiet game – he let an empty-net slip away when the puck hopped over his net – and it was at a critical point in the game. Not good for a guy looking for a call-up.

Tough game for De Leo tonight. He bobbled the puck a few times, made an ill-advised behind-the-back pass that became a giveaway, and didn’t create anything offensively.

Like several Moose players, he also had a bad game. While he converted the Dano pass, he didn’t create anything of his own, and he let a prime two-on-one chance slip away (the puck slid off his stick). He also gave the puck away late in the third, leading to Bakerfield’s empty net goal.

He had a lot of jump, and was good on the forecheck, but wasn’t used a lot in PP or PK situations and so he didn’t get a ton of ice time overall.

A quiet night for a young winger. Played with Roslovic and Petan, and didn’t do anything wrong, but certainly didn’t create anything offensively either.

Created a few chances early on, but was silent the rest of the night.

Looked strong on the puck as you’d expect, looked decent out there, but didn’t accomplish much in the end.

Didn’t play a lot. Didn’t help or hurt the team on the ice tonight.

Overall a steady game from Melchiori, though he made a few forays into the offensive zone and took a few shots which might have turned out better had he kept his head up and seen the better options around him.

Was surprisingly involved offensively with 3 shots, but had a rookie moment when gave the puck straight to his opponent for the Condor’s second goal of the game.

On defence, a quiet night is often a good night, and that’s how you’d describe Kostalek’s play tonight on the team’s third defensive pair.

Paired with Kostalek, he had similarly unremarkable night (as in, no remarks to made).

On the top pairing with Melchiori, Czuczman played a decent game, though he showed some tentativeness when the Moose were down by 2 and then 3 goals, standing back at the blueline when he had ample opportunities to jump into the high slot and help turn the tide.

Paired with 20-year-old Nogier, Strait was a wreck tonight. His most notable play was an ill-advised shot into the forechecker’s pads, which created a breakaway against. He made this type of play several more times on the night, though with less dire consequences. Not a good home debut for the vet.