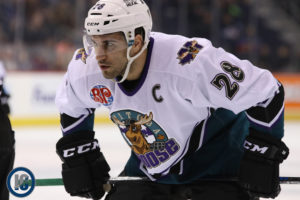 The Manitoba Moose will be in need of a new captain for the 2018-19 season as Patrice Cormier will be heading overseas to the KHL for next year to play for Barys Astana in Kazakhstan.

The native of Moncton, NB has been with this organization since the Atlanta days when he arrived as a fresh faced prospect (2008 2nd rounder) from the New Jersey Devils as part of the Ilya Kovalchuk trade back in 2010.  He split his time between Atlanta and their farm club in Chicago that season but did play his first 21 NHL games and scored his first NHL goal.  This would be the only goal of his career in the 52 NHL games he played.

After the team moved to Winnipeg he split his time between the Jets and IceCaps which included being part of the St. John’s team that went to the Calder Cup Final back in 2013-14.  The last two seasons he has been on AHL deals with the Jets farm club and was named captain in 2016 after John Albert departed went overseas.

He was always a good pro to deal with and we wish him the best over in the KHL.