News about the Jets RFA. 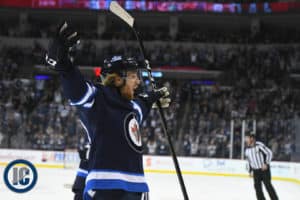 With Jets Development Camp in full swing this week the focus has been on prospects here in Winnipeg but the underlying question to team brass has been the situation with their restricted free agents (RFAs).  They had until 4 pm on Tuesday to tender qualifying offers to their 11 RFAs and in the end chose to submit same for six players including Kyle Connor.

The speaking period for other NHL teams to talk to RFAs began today.  And Pierre LeBrun of TSN had this to say about it:

Does this mean Jets fans should panic? Nope. It isn’t a surprise that teams with a need for a scoring winger would reach out to the Michigan product who has produced back-to-back 30+ goal seasons here in Winnipeg.

But it probably adds to the stress level of GM Kevin Cheveldayoff who has a lot of work ahead of him as he tries to get Connor and Patrik Laine (and others) signed to new deals.

If you have questions about how offer sheets work the folks at Cap Friendly do a great job of answering them.