Another win for Kyle Connor. 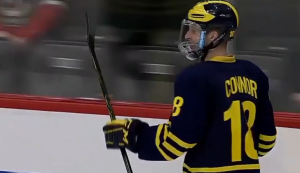 Another accolade for the Jets 2015 1st round pick as he wins the USA Hockey College Player of the Year.

University of Michigan forward Kyle Connor finished his first collegiate season as the nation’s top scorer with 35 goals and 36 assists for 71 points in 38 games. He was also the NCAA leader in goals (35), goals per game (.92) and points per game (1.87), and was tied for the nation’s lead in power-play points (24) and hat tricks (2). Connor, who finished the season with a school-record 27-game point streak, was named recipient of the 2016 Tim Taylor Award, given annually to the best rookie in NCAA Division I men’s ice hockey. He also was a top-three finalist for the 2016 Hobey Baker Memorial Award. His 35 goals marked the most-ever by a rookie and his 71 points were the second-most by any freshman in Michigan history. Selected as the Big Ten Player of the Year and Freshman of the Year, Connor was the first Wolverine to reach 35 goals and 70 points in a single season since the 1996-97 campaign. The AHCA/CCM First-Team All-American also led his team with 19 multi- point games, including 12 multi-goal performances. The Shelby Township, Michigan, native helped the Wolverines to their 17th Great Lakes Invitational title with three points (one?goal, two assists) in two games. For his efforts,?he was named tournament MVP. Connor represented Team USA on the international stage as a member of the 2016 U.S. Men’s National Team that finished fourth at the IIHF Men’s World Championship in St. Petersburg and Moscow, Russia, in May. In five appearances, Connor recorded two assists. A 2015 first-round draft pick (17th overall) of the NHL’s Winnipeg Jets, Connor signed an entry-level contract with the team following the 2015-16 season.