Joel Armia movin’ on up

Moves from the 4th to the 3rd line.

Playing in his fourth NHL game (third with the Jets) Joel Armia was bumped up from the 4th line with Matt Halischuk and Andrew Copp to the 3rd line with Alexander Burmistrov and Nikolaj Ehlers.  When asked about how he is feeling about his game Armia told the media “every game I’m getting more comfortable and it is getting better.” 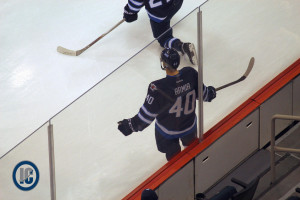 Following the contest Jets bench boss Paul Maurice was quite effusive in his praise of the Finnish forward saying “I liked him before and after.  What’s this?  His third game in the National Hockey League and he looks like he’s got some pace to his game that we didn’t see maybe early on, so there is some development there.  Saw it in the American League, he’s played pretty well for the Moose.  Gets that puck across his body pretty good, makes a pretty good play with it.  Got a lot of youth on that line the way I left it but who knows maybe he can fight for more ice time.”

When asked if he asked Armia to be more involved coach Maurice added “The development of a young player, especially a skilled guy like that, you have an awful lot of success playing on outside and the National League won’t let you to do that.  But he’s been better in the American League and I’m happy for him cause I like what he’s done since he’s been here and there’s some hope there for him.  He looks like a pretty good young player.”