The Winnipeg Jets today announced they have traded defenceman Johnny Oduya to the Chicago Blackhawks in exchange for their second and third round draft choices in the 2013 NHL Entry Draft. 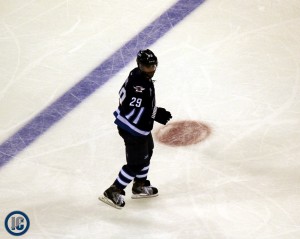 From the Winnipeg Jets:

The Winnipeg Jets today announced they have traded defenceman Johnny Oduya to the Chicago Blackhawks in exchange for their second and third round draft choices in the 2013 NHL Entry Draft.

He was originally drafted by the Washington Capitals in the seventh round, 221st overall, in the 2001 NHL Entry Draft.

Instant analysis: This is a solid deal made by GM Kevin Cheveldayoff, getting two picks is more than enough for Oduya. The rookie GM has done well so far in his first trade deadline day showing thriftiness by acquiring Clitsome and getting two draft picks for Oduya who was a UFA at the end of the season.

The Jets could afford to give up Oduya during their playoff push due to their depth on defence, most notably because of the emergence of Mark Flood.

Dennis Beyak voice of the Winnipeg Jets for TSN Jets appeared on the Illegal Curve Hockey Show this afternoon and said:

“I thought, if they could get a 3rd round pick (that would be a good move), there are so many defenseman out there that are 5, 6 type guys that teams are willing to move. Gilroy, Lee, there have been defenseman who have switched teams. If they could muster up a 3rd round pick, I thought that woudl be a good trade for the Winnipeg Jets. The offset is that they are not until 2013, but the scouts are saying the 2012 draft is not as deep as 2013.”

Johnny Oduya appeared on TSN shortly after the announcement of the deal and had the following to say:

“The crowd’s been unbelievable, the crowd’s have been great. Any time you battle with your teammates for a whole year, you’re a little bit sad to leave.”

“I haven’t talked to anybody (Chicago executives) yet, you guys were the quickest to call, like you said hopefully when you get brought soehwere they can see you can do some good for the team, that’s what i want to come and do.Chicago’s a great place to be, for me it’s going to be really fun.”

“You live, breathe, eat and do whatever with a group of guys, and it changes very very quick, you see opportunity where you go too, it’s tough to explain, you’re excited but a little bit let down at the same time. I’m looking forward as I go down there and get to know some of the guys, and put on that jersey things are going to change.”

“No, I haven’t seen anybody (teammates) yet, i’ll make a couple phone calls this afternoon, it’s a good thing for everybody. Hopefully some of the guys are sad to see me go, but you never know.”

Oduya is the type of puck moving defenseman that the Blackhawks needed, and should take some pressure off of young Nick Leddy.
Articles:

The Sporting News:  In Johnny Oduya, Chicago Blackhawks get their defenseman

Sara Orlesky (@saraorlesky): “#nhljets get a 2nd and 3rd rd pick in 2013 from the Hawks in Oduya deal. Nice job by Cheveldayoff. More than what a lot of us here predicted”

Barry Melrose: “”I think it is a great move for Chicago. Obviously, they needed defensive help, and Oduya fits the Chicago style. He is a great skater and a guy who can really help their depth, and they didn’t have to give up anyone off their roster.””

Jesse Rogers (@ESPNChiHawks): “just ok. but an upgrade on the third pair…so its something” “Quick take…This is a small move…good skater..kind of small and soft…fits style for puck possession but thats it…” “Boy, 3.5 mil gets you 13 points and a minus-9….didnt realize he made that much…UFA after this yr”