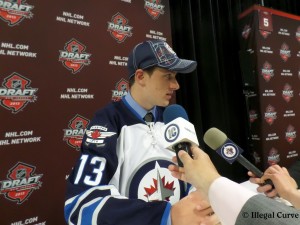 The Winnipeg Jets are pleased to announce they have agreed to terms with forward Jimmy Lodge on a three-year, two-way, entry level contract with an average annual value of $805,000.

Lodge, 20, is in his fourth OHL season which he has split between the Saginaw Spirit & Mississauga Steelheads. The native of Downington, PA, has collected 62 points (28G, 34A) and 51 penalty minutes through 56 games this season. In his junior career, he’s compiled 187 points (83G, 104A) and 138 penalty minutes over 224 games with Saginaw & Mississauga.

He was drafted by the Winnipeg Jets in the third round, 84th overall, in the 2013 NHL Draft.