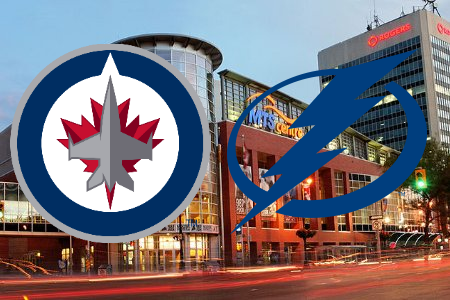 Winnipeg—Desperate times call for desperate measures, and on Monday night at MTS Centre, the less talented but more desperate of two Southeast Division rivals came away victorious. Rest assured, that in the midst of a five game losing streak, and looking beyond dispirited in their last game on Saturday night in Columbus, the Winnipeg Jets, eventual victors on Monday night by a 5-2 margin, were far more desperate than their opponents from Tampa Bay.

The Jets opened the scoring at the 6:51 mark of the first period after Dustin Byfuglien, who played his best game of the year, kept the puck in at the blueline. Seconds later Evander Kane showed off his premier wrist shot, zipping it past Lightning goalie Dwayne Roloson. Less than seven minutes later, the Jets took a 2-0 nothing lead on a slap shot from the point by Dustin Byfuglien. Assist went to Evander Kane, but even though it won’t show up on the score sheet much credit must be given to Jim Slater who got away with a bit of interference on Dwayne Roloson, distracting/interfering enough to allow Byfuglien’s heavy slat shot to hit the back of the twine. 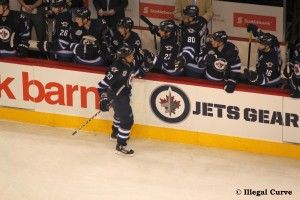 The Jets scored the eventual game winning goal at the 7:49 mark of the 2nd period on a powerplay goal by Mark Flood, with assists to Tim Stapleton and Bryan Little. Evander Kane had a very effective screen in front of Roloson, making it much more difficult for Roloson to see the shot from the point.

The Lightning got on the scoreboard less than three minutes later when the Lightning’s dynamic trio of St. Louis, Stamkos and Lecavalier scored. It was a testament to the Jets play tonight, that for as offensively talented the Lightning are, the Jets were able to weather the Lightning’s offensive storm to the tune of two goals, including killing off a lengthy 5-3 powerplay opportunity late in the 2nd period when the game was still up for grabs.

The Jets finished off the scoring in the second period mere minutes after the Lightning got on the scoreboard, when Andrew Ladd had a tremendous tip in goal off a shot from the corner by Johnny Oduya. Final assist on the Jets 4th goal was given to Kyle Welwood.

The third period began with the Jets holding a 4-1 lead. Thus far in the season, the Jets have played with a lead very tentatively and like a team unsure of how to handle the advantage. Tonight was completely different, as the Jets played an intelligent, risk free third period, exactly like a team with a three goal lead should play in the NHL. They even increased their lead at the ten minute mark of the 3rd period, on a goal by Tim Stapleton, who banked the puck in off the skate of Lightning defenseman Bruno Gervais. The Lightning added their second goal of the night on a breakway by Steven Stamkos twenty two seconds later, but that was a case of window dressing, as it was far too little, far too late for the Tampa Bay Lightning on this Monday night.

The Winnipeg Jets will have an open practice and hold their skills competition on Tuesday night at MTS Centre. Had the Jets not performed well tonight, tomorrow night’s festivities would feel a lot different, with an undercurrent of upheaval surrounding the entire festivities. Considering that the only thing the Jets screwed up on this night was the curtain call for the three star selections (Evander Kane started to emerge but then stopped before hitting the ice, Ondrej Pavelec emerged despite not being selected, and Dustin Byfuglien was nowhere to be found for his turn at the ovation), the pressure that had been suffocating the Jets is lifted for at least one night and they can enjoy the skills competition Tuesday night.

Jets on a Deadline: Jets v. Blue Jackets–November 12, 2011
Jets Show Off Their Skills