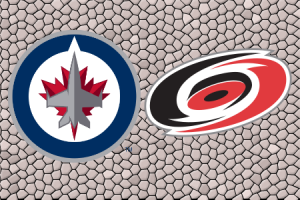 Winnipeg—There are certain nights in a NHL season where your opponent comes to the rink pre-disposed to a defeat. Sometimes it’s the injury bug, and sometimes your opponent is on the second half of back to back road games. Such was the case for the Winnipeg Jets versus the Carolina Hurricanes on Saturday night, and to their credit, the Jets took full advantage of a visibly tired Hurricanes team.

At the start of the game, it appeared the Jets wouldn’t be able to take advantage of the Hurricanes travel schedule, which saw them arrive in Winnipeg after 2:00 AM Saturday morning, as the Hurricanes jumped out to the lead, on a controversial goal following a goal mouth scramble. 60 percent of the time, the ref would have blown the play dead, but this was one of the instances where the ref viewed the puck as still being live, and Jussi Jokinen capitalized for the Canes, with assists to Chad LaRose and the dynamic Jeff Skinner. 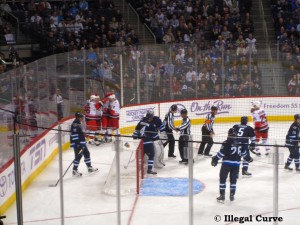 The Hurricanes made it 2-0 a little over two minutes later after another goalmouth scramble, goal being registered by Jeff Skinner with assists to Chad LaRose and Jussi Jokinen. While neither goal could be attributed as the fault of Ondrej Pavelec, Claude Noel made the goaltender change to Chris Mason, and it enlivened the Jets.

To their credit the Jets took advantage of the Hurricanes and the terribly shoddy goaltending of Brian Boucher before the period was up, with goals scored by Alex Burmistrov and with one second left on the clock, Kyle Welwood. Both goals were on the powerplay and the struggles of the Jets PP to start the season, were officially over.

The second period is where the Jets did their most damage, as they had their third straight unanswered goal on a slapshot by Jim Slater, that simply, has to be stopped by a goaltender playing in the NHL. The fourth goal was on a shot from the point, where the puck took a wicked hop into the top corner past Brian Boucher, and the captain Andrew Ladd was on the scoreboard. The Jets fifth unanswered goal came 7:30 into the 2nd period, potted by Evander Kane, with assists to Nik Antropov and Mark Stuart. Tremendously positive for the Jets today is that it was the Jets topline talent that did the bulk of the damage tonight. Alex Burmistrov continued his dangerous and dynamic play, but for the first time all season both Blake Wheeler and Evander Kane stepped up and played a larger role for the Jets.

The third period started with both teams appearing to just want the clock to wind down, but penalty trouble let Carolina back into the game, as the Jets took numerous third period penalties, including being two men short for almost two minutes. Had the Hurricanes capitalized on any of their numerous powerplay scoring opportunities, the final minutes of this contest would have been much more frantic, which is not to say that they weren’t anyways. Stellar saves by Chris Mason, who only had a few to make, but the ones he did make were off quality scoring opportunities, meant the Jets were going to leave MTS Centre on this Saturday night as victors, completing the double dip of Jets-Bombers victories, and putting a ribbon on one of the best sporting days in the history of this fine city.