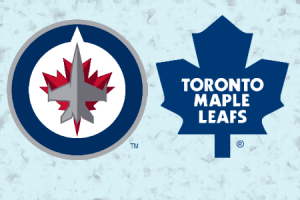 Winnipeg—The Winnipeg Jets travelling carnival arrived at its latest destination, Toronto’s Air Canada Centre, and on Wednesday night the Jets were clearly the better of the two teams for the first forty minutes. Unfortunately for fans of the Winnipeg squad, the game is sixty minutes in length, and the Jets team that took to the ice for the 3rd period was out classed in every manner possible, so much so, that the Jets should be thankful they got one point out of the contest, after the shootout loss.

The game started with a flurry, as the Jets continued their up-tempo play from Monday night versus Pittsburgh, being the more aggressive of the two teams, and taking the play to the Toronto Maple Leafs in the early going. The Jets opened the scoring at the 9:49 mark of the first period, registering their elusive first power play goal, on a shot from the point by Tobias Enstrom. Assists went to Bryan Little and Dustin Byfuglien, and for fans who have been clamouring to see Big Buff in front of the opponent’s net more often, they got their desire as Byfuglien gave the puck to Enstrom at the point, then made a straight beeline to the front of the net where the only thing Leafs goalie James Reimer could see was the back of Winnipeg Jets jerseys.

The Leafs matched the Jets goal less than two minutes later when Joffrey Lupul put a puck past Ondrej Pavelec, with assists going to Phil Kessel and Tyler Bozak. The duo of Lupul and Kessel, later joined by face off savant David Steckel proved to be a headache for the Jets all game long, as every time Lupul or Kessel were on the ice, they dominated the play. If those two play this way all year, Leafs nation will be praising Brian Burke for his expertise in acquiring both individuals.

The second period started off with the Maple Leafs apparently forgetting to come out and play the period. A less motivated group of hockey players you are unlikely to see, as the Jets completely dominated the second period, resulting in boo birds emanating from the crowd at the ACC. (Admittedly, that may have been due to a poor selection of sushi in the arena—sometimes it’s hard to tell with that crowd.) The Jets capitalized on the Leafs apathy2:27 into the frame on a goal by Alex Burmistrov, assists going to his linemates Nik Antropov and Kyle Welwood. The line that played so well against Pittsburgh continued their strong play tonight in Toronto. Five minutes later, Jets rookie Mark Scheifele had his dreams come true, as he scored his first NHL regular season goal, in front of his friends and family at the Air Canada Centre. To boot, the goal came on the powerplay, meaning the Jets PP was officially on a hot streak after so much hand wringing at the beginning of the season over its struggles. After 40 minutes, the Jets had the game well in hand, and were on their way to their second consecutive victory.

Unfortunately the Jets began the third resembling the squad that played the first 3 games of the season, rather than the group that had played the last 5 periods in a more aggressive manner. Running around in their own zone, and a lack of urgency, cost the Jets, as within a span of 27 seconds shortly before the midway point of the period, the Leafs had tied the game on goals by Lupul and Phil Kessel. Both goals came on the power play, as the Jets didn’t have an answer for that duo, and it showed on the score sheet.

The rest of the third period and the overtime four on four period saw decent scoring chances by both squads, but undoubtedly, the Leafs had the better of the chances and if it wasn’t for some nifty saves by Ondrej Pavelec, the Jets would not have had the opportunity to gain a single point, never mind have the chance for the proverbial “bonus point”. The breakaway competition (i.e. shootout) saw the Leafs score on two of their three attempts, and they left the ice at the ACC as the winners on a night when they were outplayed for the bulk of the contest.

No time to dwell on what could have been for the Jets, as they have to make the quick trip up the 417 to Kanata, where the Jets will play the young, rebuilding Senators on Thursday night, with the opportunity to collect three out of a possible four points on this short two game Ontario road trip.

Final Score (in a shootout):