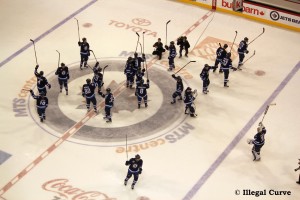 Winnipeg—It’s amazing what seven days can do. Coming into the start of this week and its accompanying three game home-stand, the Winnipeg Jets were a team with minimal confidence, and questions abound. People, in their unique expertise, were calling for wholesale changes, trade the bums, get rid of the coach. One week and three home ice victories against three of the Eastern Conference’s best, including this afternoon’s 6-4 triumph over the Flyers, and no Winnipeg Jet will have to pay for their own meal tonight.

The Jets came out exactly where they left off on Thursday, scoring the first three goals of the game before the game was barely ten minutes old. Bryan Little, who centered a new line flanked by Evander Kane and Blake Wheeler started the scoring at the 4:45 mark with a powerplay goal. Dustin Byfuglien took a hard shot from the point, and the rebound ended up on the stick of Little with an open cage in front of him. Just over two minutes later and Little had his second of the night and fourth on the season. An easy wrist shot was muffed by Flyers goalie Sergei Bobrovsky and the Jets were two goals ahead. Andrew Ladd had the third goal of the period a little over three minutes later capitalizing when the undisciplined Flyers were shorthanded, giving the Jets the man advantage for which they were more than happy to take advantage. The powerplay was clicking all night for the Jets, as they scored three goals on eight opportunities. 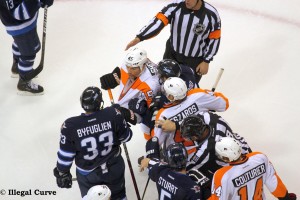 The second period began with the Jets holding a 3-1 lead, as the Flyers scored on their powerplay at the 13:27 mark of the 1st period. The Flyers were on a powerplay five minutes into the second, poised to make it a 3-2 game when the Jets scored a shorthanded goal after Chris Pronger mishandled the puck at the offensive blueline. Jim Slater took advantage, zipped a shot past Bobrovsky, and rather than it being a 3-2 game, it was a 4-1 Jets lead. The Jets scored the eventual game winning goal under five minutes later, again on the powerplay, this time a two man advantage, as Dustin Byfuglien scored from a bad angle, assists going to Ladd and Welwood. The Flyers answered with Scott Hartnell’s second of the game before the period was up, and the Jets had a 5-2 lead after 40 minutes.

The third period started with the Jets trying to hold onto a third period lead for the third consecutive game, and in contrast to Tuesday v ersus Tampa and Thursday versus Washington, the Flyers would not go quietly. Two goals by Mark Read, eight and a half minutes apart made it 5-4 Jets, and caused stomachs in MTS Centre to tighten just a little bit. With the net empty, the Flyers made a terrible neutral zone turnover, and Nik Antropov capitalized, shooting the puck into the vacated goal, rounding out the scoring on this Saturday afternoon, sending the MTS Centre into a frenzy, and giving the Winnipeg Jets a three game winning streak, a well-deserved Saturday night on the town with Sunday being a day off for the team before the head out on the road for three games in four nights this next week.

The Jets proved their mettle this week on home ice, sweeping these three games.  It will be interesting if the Jets resemble the squad that swept the Lightning, Capitals and Flyers, or the squad that sleep walked to losses against the Panthers and Blue Jackets on the upcoming road trip to Washington, Carolina and Boston. For this week, the Jets looked like world beaters, and as such deserve to celebrate in kind.