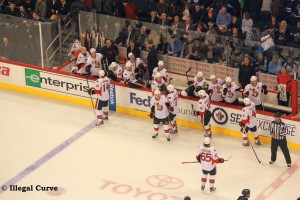 Winnipeg— The Winnipeg Jets took to the ice Tuesday night versus the Ottawa Senators firm in the knowledge that this contest was the first of 13 home games in the next 32 days that will undoubtedly make or break the Winnipeg Jets season. As one of the team the Jets were looking up at in the standings, a win versus the Senators was doubly important in conjunction with wanting to get the home stand off to a positive start. Sixty minutes of game play later, and the fans who populated the MTS Centre departed the premises with a sour taste in their mouth, after a 6-4 Senators victory, and the Jets home stand was off to a negative start.

A back and forth contest that saw numerous lead changes did not start off with an offensive explosion. In fact it took until the 15:55 mark of the first period for the first score to be recorded, with the Senators capitalizing when Milan Michalek continued his torrid pace to the season, scoring his 13th and 14th goals of the relatively young campaign tonight, and pacing the Senators to a one to nothing lead.

After a slumberous first period, both teams brought out the offensive guns for the second period, as both teams scored twice, with the Jets scoring the first two goals of the period, the first from Blake Wheeler, and the second from Alex Burmistrov, who potted his first goal since November 3rd versus the Islanders. A 2-1 Jets lead lasted only 35 seconds though as Zack Smith scored his first of two goals on the night, and he was followed on the score sheet less than four minutes later by the aforementioned Milan Michalek who got his second of the night. After fourty minutes the Sens had a 3-2 lead, and in a rarity in today’s NHL, all the goals scored in the first two periods were of the even strength variety.

The Jets scored the sixth even strength goal of the game, and the tying goal, 1:24 into the third period, as Evander Kane, who, not surprisingly, was the best Jets forward all game long, scored his 11th of the year on a rebound after a shot by Zach Bogosian. Kane wasn’t done, as a mere 77 seconds later he scored again, this time on a powerplay, with Mark Flood drawing the only assist. The Jets had their second lead of the game and needed to hold on for another 17 or so minutes to get the home stand off to a good start.

It wasn’t meant to be for the Jets, as Jason Spezza showed why he is still an elite NHL goal scorer, snapping a shot past Ondrej Pavelec after one of the nicest five way passing plays you will ever see. While the Senators are certainly young, their core offense of Spezza, Michalek, Alfredsson with Erik Karlsson make them a very dangerous team. Coupled with their youth, they are certainly a team on the rise. Four minutes later Zack Smith had his second of the game, and the eventual game winning goal, scoring from just above the hash-marks on a Senators powerplay. Nick Foligno wrapped up the scoring, placing the puck into an empty net, and the Senators were able to depart Winnipeg 6-4 victors, and with the knowledge that they kept a conference opponent at bay.