The Winnipeg Jets take on the team formerly known as the Winnipeg Jets or as we say Jets 1.0 vs. Jets 2.0. Fans have had this date circled on the calendar for awhile so it should be a great atmosphere (as per usual) at the MTS Centre. Here is your game preview. 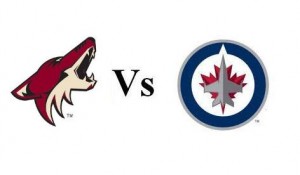 The Story:  The Winnipeg Jets will look to end a two-game losing skid when they meet the team formerly known as the Winnipeg Jets (proper name: Phoenix Coyotes) tonight at the MTS Centre (7:30 p.m.).

The visiting Coyotes seem to be going in the opposite direction of the Jets right now, as they are winners of their last two and six of their last 10. The ‘Yotes defeated the Chicago Blackhawks 4-1 on Tuesday night and currently sit atop the Pacific Division and are third in the competitive Western Conference. Phoenix doesn’t possess any superstars, unless you consider Lauri Korpikoski a superstar, but they know how to win and even though it is a sports cliche as tired as the Maytag repairman, it is the simple truth.

The Coyotes play a smart, simple game (limiting shots and turnovers) and take few penalties (The Coyotes lead the NHL in Average Penalty Minutes Per Game at 8.2 PIM/game). Head Coach Dave Tippett is one of the best hockey minds in the business and his defensive-minded systems have worked wonders in Phoenix as they have made the Stanley Cup Playoffs the past two seasons. Tippett’s teams may be boring but they are successful and the 2011’12 version of the Coyotes doesn’t appear to be any different.

In anticipation of tonight’s game, the Jets made a roster move yesterday, calling up Carl Klingberg from the St.John’s IceCaps of the American Hockey League. The move was made as a precaution because Jets forwards Eric Fehr and Nikolai Antropov (blocked shot) suffered injuries in Tuesday’s game against the Ottawa Senators and did not practice on Wednesday. Klingberg has nine goals and 7 assists in 20 games for the IceCaps this season. The feisty Klingberg might be just what the doctor prescribed because the last time the Jets and Coyotes met (October 15th), the Jets were lifeless and not overly physical. Klingberg is a big, speedy winger who loves the physical style and he will be looking to make an impression on Head Coach Claude Noel if he plays.

Whether or not Klingberg plays, the Jets will be looking for a more stable effort tonight versus the Coyotes. The Jets have now held and lost leads in two consecutive games (losses against Ottawa and Boston) and the Jets brass is getting pretty tired of it.

After tonight’s game against the Coyotes, the Jets continue their five-game home stand this Saturday, December 3rd against the New Jersey Devils (CBC’s Hockey Night in Canada). The Jets then play the Boston Bruins on Tuesday, December 6th and the Carolina Hurricanes on Friday, December 9th.

NOTES…..Jets defenseman Ron Hainsey is still day-to-day with a lower-body injury….. Coyotes goaltender Mike Smith has a record of 12-4-1, a 2.13 GAA and .935 Save Percentage….. According to Forbes Magazine, the Winnipeg Jets franchise is worth US $164 million dollars…..The Coyotes are 7-3-1 on the road this season…..The Jets are 0-10-2 in games in which they have trailed after two periods…..