With the first half ot the NHL season coming to a close this week, it is only fitting that on Saturday’s Illegal Curve Hockey Show, Drew, Richard and Ezra gave their midseason awards for the team.

The Illegal Curve Hockey Show normally airs Saturdays from 12-3pm on TSN 1290, but it will be airing at a special time from 8-11 am this Saturday.

The first award discussed was the topic of MVP, which is always a tricky conversation. Drew, Richard and Ezra all agreed that Evander Kane has been the best player, but Ezra thought that Pavelec has been most valuable to the team’s success. 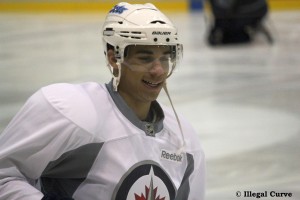 Ezra: “not even close, it’s Pavelec”

Richard & Drew: “I think you’re out of your mind”

Ez: “Which one guy do you take out of the lineup and it would have the most negative impact, if you look at what one player has had an impact on this team, Kane is in the conversation, but Pavelec has stolen more games.”

Richard: “You take Kane or Pavelec out of the lineup, who’s harder to replace?.”

Drew: “Who would be scoring for this team, if it weren’t for Evander Kane, it doesn’t matter how good Pavelec is if nobody can score.”

The other argument made for Evander Kane was that it is easier to find a replacement goalie, than a player of Kane’s scoring ability.

Drew: “This is a tough one because of so many injuries.”

Ezra: “It’s Byfuglien or Bogosian, because of Enstroms injury”

Richard’s argument for Bogosian: “I think Bogosian is a great skater, good hitter, he’s learned to simplify his game and Charlie Huddy’s done a great part in that, and Bogosian has taken that upon himself. He’s played in a variety of pairings, although Stuart is his main guy, and they haven’t played together recently. He’s played very well, kept it simple, I think he’s limited chances on many nights, and he’s scored a bit. The only drawback is his ability to create offense, not only in the offensive zone, but in his own zone.”

“Byfuglien has a keen sense of where the puck needs to go, he’s cut back on the risky plays that happened in the beginning of the year.”

Ezra: “I’m going to give Coach Claude Noel a C+, because I think that he’s done a pretty good job. We’re at the halfway point of the season, the Jets are three games above .500, and a couple points out of the playoffs. When you look at how Atlanta came to Winnipeg, and how their team came together. The Jets had that terrible start, I think that Claude Noel has done a good job with transitioning the team, they had a tough road schedule at the beginning. He’s done a great job dealing with injuries. On forward, I’ve had some issue with how he’s managed some of the forward lines, I have some issues specificly with Burmistrov as of late. Overall I’ll give him a C+”

Drew: “I’m going to give him a grade of a B, for a lot of the reasons you just said. I like the way he’s been willing to mix and match (lines). He’s not being stubborn and is trying different things. I’m not crazy about some of his line combinations or burial, for lack of a better word of Alex Burmistrov. I think he’s done a good job with a lot of problems on the defensive side of the game. When the defense was riddled with injuries I think he handled that pretty well. I liked the way he handled Evander Kane at the beginning of the year when there was some growing pains. I like the way he’s managed the media and expectations in the city.”

Rich: “I’ll give him a B+. I do have the same issues as you guys mentioned. I do think his line combinations, leave much to be desired at times. I think the road record isn’t great and needs to be improved. The third drawback is I think he’s overplayed Pavelec and that will be an issue later on in the season.

What I do like about him: Special teams has improved, the underlying numbers are good. I think he manages expectations well, he manages personalities well, he doesn’t get too high and doesn’t get too low. I don’t think he gives the media too much to work with. I think the players for the most part are playing hard for him. He matches up players when he needs to. He matched the Slater line up against Ovechkin, he matches up Byfuglien & Bogosian with guys that he needs to, and he’s flexible in that regard. He also gives the hard face-off’s to Slater and those guys (who are good at face offs). He runs the bench the right way. There’s room to grow, but overall if you told me they would be in a playoff spot, I think you’d be a bit optimistic, but i think the overall job he’s done has been quite good. There has been a lot of distractions, a lot of stuff could have gone wrong. I think he’s made the team his own and has done a good job.”

The guys attempted to give Kevin Cheveldayoff a grade, but determined that it has been much too soon in the GM’s tenure and instead provided commentary. Chevy has been risk averse, with logical moves that will serve the team well in building for the future. He has signed a number of players to one year deals (Wellwood, Glass, Jones), effective sent players up and down from St. John’s (Cormier, Kulda, Postma, Flood, Jaffray) and addressed the teams shortcomings with some mid season moves (Miettinen). In the next year, we’ll have the the trade deadline and free agency which will be indicators on how he is able to perform as GM. For past commentary on some of his moves & signings, check out the category “Roster Analysis“.

Readers, who do you give your misdeason awards to? Who do you think is the MVP this season? What are your thoughts on Coach Claude Noel? Sound off in the comments.