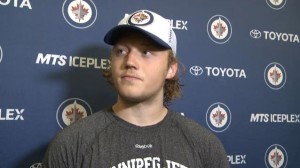 Selected in the 2012 NHL Entry Draft, Ryan Olsen spoke with the media today following day 4 on the ice with the other prospects.

Ryan Olsen –  The week thus far.  Good barometer when he comes back to camp to see where his game is at?  What kinds of things have the team told him as he tries to take next steps?  What has been his favourite part of the week?  What is the talent pool like on the ice?  Does it push him harder?