Hear from undrafted Karson Kuhlman on Day 4 of Camp. 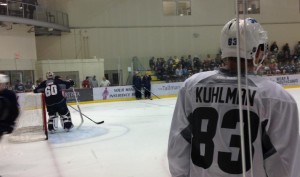 Karson Kuhlman (@K_Kuhlman20) went undrafted in the 2014 Entry Draft but was invited to Jets Development Camp.  Sean Assor (@TheSassor) of TSN 1290 Winnipeg caught up with him today and had this 1 on 1 with the Minnesota prospect.

Karson Kuhlman –  His thoughts four days into camp.  His thoughts on the talent on the ice.  Looking around a bit?  What was it like to get the invite?  How did he find out?  Did he know anything about Winnipeg before coming up here?  What was his mind frame coming into his first pro camp?  A lot to take in?  What does he want to focus on at this camp?  Does he have something to prove?  On being a competitive player?  What does he want to work on for his game?  What does he think when he see’s himself in Jets gear?  Heading to University of Minnesota-Duluth.  On wearing a visor.  Career talk.  Being able to play on the Jets in the future.

Last up before jetting off was bench boss Rick Bowness.

Also speaking ahead of the game against the Flames was Jets forward David Gustafsson.