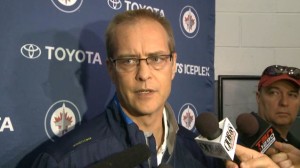 Coach Paul Maurice –  Talking about the prospects on the ice.  Does he see the game trending towards smaller players?  What does he pass a long to young players about becoming a professional and the priorities.  Level of commitment in today’s game towards fitness.  How important is it for him to see these guys at this stage?  Getting to know the prospects.  What does he need to see from the prospects?  Does he warn the prospects about the difficulty of fall camp?

The bench boss also spoke about the team Jets fans will see in September:

Coach Paul Maurice – Thoughts about his team in September.  Talking about Matthew Pereault.  Line chatter.  The improving Central Division.  How encouraging is it that his players used his coaching as a sales pitch to free agents?