Jets announce Hall of Fame inductees and also announce that they will wear Heritage Classic jerseys twice this season. 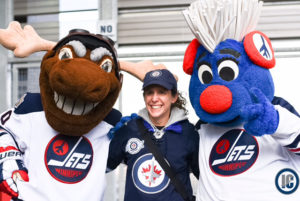 In addition to the jersey news the team announced the two newest inductees into the Jets Hall of Fame being Ab McDonald and Lars-Erik Sjoberg.  The team release has more on these two inductees.

The Winnipeg Jets Hockey Club will induct Ab McDonald and Lars-Erik Sjoberg as the fifth and sixth members of the Winnipeg Jets Hall of Fame. Both players, who served as team captains during the World Hockey Association (WHA) era, will be honoured posthumously at a special Hall of Fame induction ceremony prior to the Tuesday, Feb. 26, 2019 Alumni Night game where the Winnipeg Jets will take on the Minnesota Wild at Bell MTS Place.

To recognize the event, the Winnipeg Jets will wear their adidas adizero Authentic Pro Heritage jerseys on Alumni Night. It will be the second of two appearances of the Heritage jersey this season, the other being at the Monday, Dec. 31 away game vs. the Edmonton Oilers at Edmonton’s Rogers Place. The jersey adopts the same look worn at the 2016 Tim Hortons NHL Heritage Classic. The Winnipeg Jets adidas adizero Authentic Pro Heritage jersey will be available online at shop.nhl.com, adidas.com, adidas.ca and at all Jets Gear locations, including its flagship store at Bell MTS Place, on Friday, Nov. 30.

McDonald and Sjoberg join Anders Hedberg, Bobby Hull, Ulf Nilsson and Dale Hawerchuk in this honour. The Hall of Fame was established in 2016 to officially recognize the accomplishments of the team’s alumni and to celebrate the rich history of the franchise and its impact on the city.

Ab McDonald, a native of Winnipeg, played 16 seasons in the NHL from 1958-72 with the Montreal Canadiens, Chicago Blackhawks, Boston Bruins, Detroit Red Wings, Pittsburgh Penguins and St. Louis Blues before playing the final two seasons of his career with the WHA’s Winnipeg Jets from 1972-74. He was the first captain of the Winnipeg Jets and scored the first goal of the Jets’ WHA era. He was a four-time Stanley Cup champion, winning the cup in four consecutive seasons from 1958-1961. McDonald passed away earlier this year in September at the age of 82 after a battle with cancer.

Lars-Erik Sjoberg, born in Falun, Sweden, played for the Winnipeg Jets in the WHA era from 1974-79 and the first season in the NHL in 1979-80. Known as “The Professor” and “The Little General” while playing for the Jets, Sjoberg helped lead the Jets to the Avco Cup in 1976, 1978 and 1979 before serving as the first captain of the Jets 1.0 NHL era. He was also an accomplished player internationally with Sweden, playing in the 1968 and 1973 Olympic Games. He also played in five World Championships for Sweden and the 1976 Canada Cup. Sjoberg passed away after a battle with cancer in 1987 at the age of 43.