The Winnipeg Whiteout Street Party has decreased in size as the Jets have progressed in the playoffs.

Almost as exciting for the city of Winnipeg as the Jets advancing in the Stanley Cup playoffs farther than any NHL team has ever done in Winnipeg before has been the embracing of the Winnipeg Whiteout Street Party which had, prior to this round, continued to grow and grow as the excitement in the city built with the success the team was enjoying. 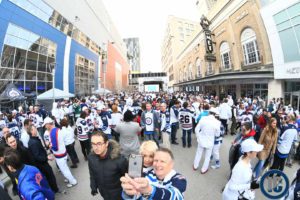 It was so successful after game 1 of the series against the Wild in round 1 that they immediately expanded it ahead of game 2.  After the series moved to St. Paul for games 3 & 4 the venue was increased in size by 50% ahead of game 5 vs. Minnesota to accommodate all the Manitobans who wanted to participate.  Ahead of round 2 further adjustments were made to accommodate 20,000 fans.  Ahead of game 6 with the chance for the Jets to clinch a spot in the Western Conference Final against Nashville the capacity was increased to 23,000.

With the Jets in the Western Conference Final for the first time ever the decision was made to mandate a ticket policy ahead of the third round.  25,000 tickets were issued and fans were required to go on Ticketmaster to download free tickets or they could go to the box office and pick up tickets.  Of course a few bad actors decided to try and make money off of this by getting the free tickets and then trying to resell them.

The numbers were way down for games 1 and 2 of the Western Conference Final.  After disappointing numbers for game 1 an additional 10,000 tickets were issued but clearly it didn’t help. Economic Development Winnipeg reported only 11,000 were in attendance for game 2.  Think about that.  That is a huge drop off for a game that was way more significant in magnitude than any game played to date in the city as folks could have witnessed the Jets go up 2-0 in their series with the Golden Knights.  NHLcom correspondent Scott Billeck had a good thread on the topic today:

Only 30% of the people who claimed the 37,000 free tickets for Game 2 actually showed up to the #WPGWhiteout Street Party.

The funny thing about this is if you put the attendance from Game 1 and Game 2 together downtown, they’d still be 1,000 short of capacity. Both of those games were ticketed. https://t.co/D4W6Jo3Kx7

Organizers said the ticketed system was an improvement needed to improve the fan experience. It would appear that hasn’t worked and, largely, has only hindered the street party’s potential and spectacle given the low attendance numbers.

Clearly folks rejected the concept. Did it impact your decision to attend? What do you think will happen ahead of game 5 on Sunday?