Looks like Jacob Trouba has made his decision and will be leaving the U of M. Where he ends up is still unknown.

Update:  Jets GM Kevin Cheveldayoff confirms that Trouba has been signed by the team during the 2nd intermission of the Winnipeg and New York game.

Update III:  GM Kevin Cheveldayoff spoke with the media following the Jets loss to the Islanders:

According to EJ Hradek a senior reporter for NHL Network/NHL.com it is looking so.  He just tweeted the following:

Matt Slovin, who is the Managing Editor and hockey beat writer for Michigan Daily added the following:

Should be interesting to see how this impacts the Jets.  We have contacted Scott Brown, Senior Director of Corporate Communications, to find out if the Jets have further comment.  We will update this post as soon we hear further. 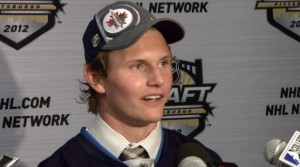 We have already examined the options for Trouba if/when he leaves college.  Listen here.