Is Winnipeg Jets assistant coach Pascal Vincent on the move?

Is Winnipeg Jets assistant coach Pascal Vincent on the move?

Winnipeg Jets assistant coach Pascal Vincent has been with the team for five season after a successful 12 year stint in the QMJHL with the Montreal Juniors and Cape Breton Screaming Eagles. 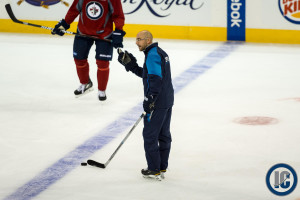 Under former Winnipeg coach Claude Noel the power play was Vincent’s responsibility. While coach Maurice has said he is ultimately responsible for the Jets special teams, Vincent is seen as the lead with the power play which aside from the inaugural season back in Winnipeg hasn’t been very successful.

One other assistant who could be moving on is Winnipeg’s Pascal Vincent. There are rumblings he’s up for some AHL and/or junior openings.

Perhaps the allure of a head coaching gig may lure the current Jets assistant coach who still has a few years remaining on his deal with Winnipeg to a new opportunity.