Should Jets have honoured/honored Thrashers history for Heritage Classic?

Where should the Jets draw inspiration from when trying to honour/honor the past?

When the Winnipeg Jets unveiled the Heritage Classic alumni jersey on Friday, which paid homage to the first jersey of the WHA Winnipeg Jets inaugural 1972 season, there were some who felt that this was a mistake.  The rational was that this first Jets team and any association with same currently belongs 3,077 kms away in Glendale, Arizona.  I should qualify that my suspicion is that this dissent is coming from folks outside the province of Manitoba but perhaps it bears some further inquiry.

When the Thrashers moved to Winnipeg back in 2011 there was no question in the minds of those who resided in the 204 area code that the name needed to be the Winnipeg Jets.  Poll after poll confirmed this and ultimately True North listened to the residents of Manitoba and there was a reincarnated Winnipeg Jets franchise. 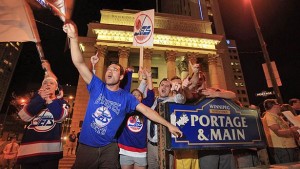 Of course just because you give a team the same name as a previous franchise doesn’t mean that you gain back the history of the first incarnation.  As stated above those records that belong to the Jets 1.0 including the three AVCO cups won in the WHA, Dale Hawerchuk’s Calder Trophy, Teemu’s NHL rookie records for goals and points along with all the others belong to a different team.  While league rules may state these are the property of Arizona it is hard to tell folks around here that their memory of Teemu tossing his glove in the air when he scored a hat trick against Quebec to break Mike Bossy’s rookie goals record at the old Winnipeg Arena is not a part of the fabric that is connected to fans here and any team named ‘Jets’.

Perhaps to get a better understanding of what has been done in the past one only needs to look two provinces over as to what the Calgary Flames have done to maintain any of the Atlanta Flames traditions or history.  Aside from the name what did folks in Cowtown do to honour their franchise’s ties to the team that left Atlanta for Calgary in 1980?  From what I could glean “they brought the old Atlanta logo to Calgary in a way with the alternate captain patches on their sweater”.

Returning to Manitoba how (if at all) does the current version of the Winnipeg Jets maintain their ties to the former franchise from Atlanta?  When you read any of the printed material provided by the team you can’t help but notice ties to the Thrashers franchise.  As I wrote this I flipped through the Jets media guide which lists the All-Time numerical rosters, for example, and under #2 we have Peter Buzak (1999-2002), Garnet Exelby (2002-2009) and Adam Pardy (2013-2015) with nary a mention of the guy who scored one of the most famous playoff goals in Winnipeg Jets 1.0 history and wore that number from 1985 to 1991, aka Dave Ellett.

In addition to the records, which are less tangible for fans, the team continues to present the Dan Snyder Memorial Award at the end of every season (to the player who best embodies perseverance, dedication & hard work without reward or recognition) which was named after the Thrashers player who was tragically killed in a car crash back in 2003. 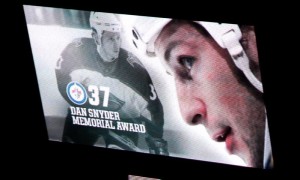 Ultimately I would say that it is easy to make an intellectual argument to draw a clear line between the Thrashers and Jets 2.0 leaving out the Jets 1.0 but this is sports and therefore you cannot remove emotions, try as you might.  By way of example when Teemu Selanne returned to the city of Winnipeg for the first time to play on December 17th, 2011 it was an experience like no other.  Fans who likely hadn’t seen Teemu play live in years felt so emotionally connected to him that they booed every Duck who touched the puck that night but would cheer Selanne, including when he was credited with an assist on the first Anaheim goal.  I remember at the time folks who didn’t live here suggesting that Teemu had only played in Winnipeg for four seasons so why the deep ties to the Finnish Flash?  It really cannot be explained.  His accomplishments may technically belong to Arizona but that doesn’t take away the street hockey games in River Heights with neighborhood kids or any of records he broke in the 1992-93 season that inspired an entire province.

Should the Jets alumni team be made up of former Atlanta Thrashers as has been suggested by some?  Instead of Thomas Steen wearing his familiar #25 should it have been Vyacheslav Kozlov wearing a #13 old school blue Thrashers uniform?

As I’ve tried to illustrate above, more often than not, sports is an area where fans use their heart and in this instance folks in these parts want to cheer on names like Hawerchuk, Selanne, Steen, Babych, Smail, Ellett, Numminen, Mantha, etc.

And the above doesn’t even take into account the economic aspect of this topic.  i.e. Teemu Selanne vs. Patrik Stefan jerseys sales.

So what does any of this mean?  Is there a right or wrong answer?

In my opinion I think the right decision was made.  I believe this city is deeply connected to the first incarnation of the Jets franchise (even Blake Wheeler and Cam Talbot alluded to this on Friday indicating that the Alumni game could be a hotter ticket than the actual Heritage Classic contest).  However the fact of the matter is there really isn’t a right or wrong answer.  Perhaps you feel that there should be more connectivity to the Thrashers or perhaps you feel that the only connection you need is to the Jets 1.0.  That is the beauty of sports.  You are entitled to voice your opinion, whether you agree or disagree with something or someone.

As always comments are welcome.

Update:  Interesting addition to this conversation as pointed out by Guardian17: Back in 2014 the NBA restored all the statistical information, records and history of the Charlotte Hornets 1.0 and 2.0.  Might we see something similar done in the NHL?