IceHogs hold on for a 2-1 win over the Moose

The Moose had two wins and two losses coming into tonight’s game with the IceHogs following the All-Star break.  However they cannot afford to be a .500 team as they came into action sitting in 8th place in the Central Division with just 26 (25 after tonight) games left to go. 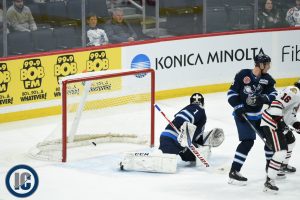 The first period began with a good push by Manitoba who outshot the IceHogs 5-0 through the first 11 minutes of the period.  Veteran defenceman Cam Schilling took a heavy hit along the boards and left the ice.  That would continue for most of the period as the IceHogs didn’t get their first shot of the game until their was 6:38 left in the frame.  A Manitoba power play would provide both teams with a chance as Eric Comrie was forced to defend a 2 on 1, although Leon Gawanke forced it to be a 1 on 1 and Michael Spacek would rocket a shot off the inside post.  On their second power play of the period CJ Suess set up in front of the net put home his 13th of the season to make it 1-0 for the home side.  They held a 10-3 shot edge as well.

Cam Schilling was back to start the 2nd period.  The middle frame seemed to be heading in a similar direction but back-to-back Moose penalties gave the IceHogs a 5 on 3 for 1:58.  While they didn’t score it gave them life back in the game.  Eventually the IceHogs caught the Moose trying to play catchup into their defensive zone and Alexandere Fortin buried a nifty cross-ice pass.  The IceHogs equaled the shot tally at 16-16 at one point but then the Moose ended the frame with a big push.  They would take the next five.  After 40 it was 1-1 and shots were 21-16 for Manitoba.

Both teams traded chances to start the final frame but after David Gustafson came close to scoring his first AHL goal the IceHogs drove into the Manitoba zone and a shot was re-directed past a screened Eric Comrie for the go ahead goal. The Moose had a number of chances to tie the game but fell short.

With the loss their record drops to 22-29-0-0 and they remain last in the Central.

Post-game Cam Schilling tells us that he took a skate blade to the side and required stitches. But the veteran was fine to begin the 2nd.

The Moose and IceHogs have a re-match tomorrow night at Bell MTS Place.  Puck drop is at 7 PM.