The playoff picture is becoming dimmer and dimmer for the Manitoba Moose as they dropped last night’s contest to division rival Rockford.  About the only saving grace is that 22 of 25 (heading into tonight’s re-match with the IceHogs) is against teams in their division.

The Moose began the day losing Andrei Chibisov back up the Jets as he was recalled. 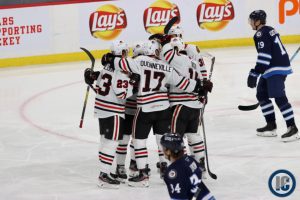 Much like last night the Moose came out the right way to start the game. They held an 11-2 shot edge at the midway point of the 1st. But once again IceHogs goalie Kevin Lankinen was fantastic.  A couple of breakdowns later and Rockford was out in front 2-0 after 20 minutes.  Moose had a 16-9 shot edge.

Lankinen left the game and was replaced by Collin Dellia (see below) but it didn’t appear to matter who was between the pipes as the IceHogs struck early to make it 3-0.  JC Lipon would score his 12th goal of the season to narrow the deficit to two goal and the middle frame would end 3-1.  Manitoba would continue to outshoot Rockford and finished the 2nd up 26-16 in that category.

Seven minutes into the final frame Tyler Sikura scored a power play goal and about seven minutes later they added an empty netter to make it 5-1.  Michael Spacek’s eighth goal of the season on the power play late in the game made it 5-2 but that was as close as it would get.

Hogs starting goalie Kevin Lankinen played the entire 1st period (made 16 saves on 16 shots). He began the 2nd period on the bench and backup Collin Dellia came in to start the middle frame. Lankinen left game after first whistle (which happened to be a Rockford 3-0 goal).  Then their third goalie Matt Tomkins, who was dressed, skated onto the ice and on the bench.

The IceHogs indicated on their twitter that Lankinen had been injured in the 1st period.  But it begged the question why put an injured player back on the ice?

I know I hadn’t ever seen that before.  Then again most teams don’t travel with three goalies.

I asked coach Vincent post-game if he’s ever seen this before: “No. No. So the referees told us when we started the 2nd period ‘he’s on the bench right now but he’s coming off as soon as the other guy’s ready’.  I’m not exactly sure what the rule is. Spoke to management after the game and we’re going to look into this one but I’ve never seen this before no.”.

The Moose are scheduled to practice today.  And they better make sure they are sharp as they will conclude this six-game homestand against the top team in the AHL starting on Saturday when the Admirals come to town.