A friend of IllegalCurve.com ventured down to Phoenix to catch two Coyotes games this weekend and here is his first-hand account.

On Sunday night I returned home after spending 4 days in Phoenix.  Along with a friend, we took in two Phoenix Coyotes games; one versus the Flames and the other versus the Senators.   I will try my best to give a brief summary of what I experienced and some recommendations for the NHL.

On our flight to Phoenix from Denver, I was sitting next to a young couple from Calgary.  They were also going down to Phoenix to catch Thursday night’s game against the Flames.  She was actually carrying her Calgary Flames jersey with her in her carry on.  Unfortunately, we weren’t so wise and packed our Jets jerseys in our luggage…..low and behold, our bags didn’t show up until after the game.  Thank you for flying United Airlines….

On Thursday night, we asked the concierge about getting a cab to the rink.  He told us it would cost $60.  About an hour later, his shift had ended and we asked the night concierge about taking a cab to the rink and he said it would be $36.  Fine.  We ended up negotiating the price down to $30.  First and foremost, our cab driver got lost.  I suspect this might indicate just how often he drives guests to the rink.  During the car ride, we asked him about the state of the Phoenix Coyotes.  He responded with, “isn’t that the team owned by a hockey player?”  We suggested he was referring to Wayne Gretzky.  He said no and was quite adamant that he had never in fact heard that name before….

We showed up to the arena and met the person we found on Craigslist who was selling us 2 centre ice box seats for $40 each.  Yes, $40 a ticket for centre ice box seats to an NHL game.  As it turns out, the couple who sold us the box actually own it and used to take their clients, but would now prefer to try to recover some of the cost of the box by selling individual seats online (FYI – Jan 2nd game vs Detroit, entire box 18 seats for $900…see Craigslist). 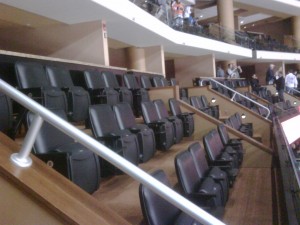 We finally entered the rink just before the anthems and I was shocked at what I saw – the arena was empty.  There may have been 4,000 fans.  Eventually as the 1st period progressed, fans did filter in….but not many.  There were, without question, way more Flames jerseys than Coyotes jerseys.  Just to put things in perspective of how few people there were at the game, we bumped into the couple I sat next to on the plane during the 2nd intermission.  I must admit it was very difficult to “get into the game” as it seemed as if there really was no emotion in the arena.  I could have quite easily been watching basketball on TV in the suite and not have known there was a hockey game going on below. 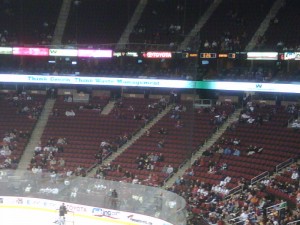 After the game, we went to one of the bars located right next to the rink.  Needless to say it was all but empty, aside from a few Flames jerseys.  I went up to the bartender and ordered two beers.  I thought the bartender had said, “25 bucks.” I figured 12 bucks a beer at the bar next to the rink isn’t totally ridiculous.  As it turns out, it was actually 5 bucks; $2.50 a beer (would have been $2 each if I had ordered Bud…no thanks).  I would suggest (based on the pricing and ghostly attendance in the bar) that it is not only the team that is losing money but also many of the nearby businesses.

We also bought $40 centre ice box seats for Saturday’s game…which actually turned out to be a pretty close game.  Again, lots of Canadians in attendance, the majority of those wearing Sen’s jerseys.   We saw 5-6 Jets jerseys (2 of which were ours).  A couple of Jets jerseys of note were the Selanne and Hawerchuk jersey.  I am sure many of the fans in the arena were just as surprised to know that there was a Selanne in the NHL, let alone that he at one point played for the Jets.   Obviously only a few, if any, would have ever heard of Ducky… 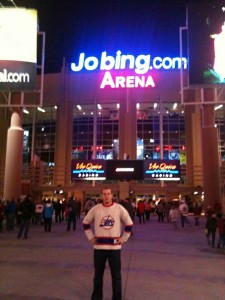 As for the game, the Sen’s were down 3-0 with less than 5 minutes to go.  With about 4 minutes to go in the 3rd, the Sen’s scored.  Now 3-1 Coyotes, less than 3 minutes to go and people (obviously not the Sen’s fans in attendance) started to leave.  How crazy is that?  And it gets worse…..With just under a minute to go in the 3rd, the Sen’s scored another goal now making the score 3-2 Coyotes.  If you can believe it, fans still continued to leave the rink.  Did they not realize there was a close hockey game going on right before their eyes?   I am not sure why, but many Coyotes fans were still walking out.  Unlike the old Jets games, it is not like they were going to have to deal with any traffic jams seeing as how there couldn’t have been more than 5,000 in attendance.  It is not like they announced the official attendance at either game, so this is merely my rough estimate.

All in all, this trip was a unique experience.  It was exciting to watch NHL hockey albeit the environment could have been a whole lot better.  I hate to admit it but going to an AHL game at the MTS Centre is much more exciting than watching an NHL game in Phoenix.  Obviously the quality of the game is nowhere near as good as the NHL, but the fans make the difference.  I really can’t imagine how opposing teams feel playing in front of fewer fans than their AHL counterparts.

Bettman and the ‘powers that be’ need to accept that this little project has failed.  Not only is this whole ordeal costing a fortune to operate, but it is both an embarrassment to the league and more so an embarrassment to the sport.    People in Phoenix do not care about hockey….period.  Phoenix is about football, baseball, basketball and guns.  Guns, you ask?  I was informed on Saturday that you can now carry a concealed weapon into a nightclub in Arizona and based on the feedback from numerous cab drivers, people are very excited about this.  We were often told that, “this was a good thing.”   Hockey in the desert, on the other hand, is certainly not.