The Panthers roll into town currently in 8th in the East having gone 4-3-3 in their last 10 games. They face a Jets team that is home for the first time in over 2 weeks. Expect the boo birds to fly for Jack Skille who hit Tobias Enstrom and broke his collar bone when the Jets last faced the Panthers on Halloween night. 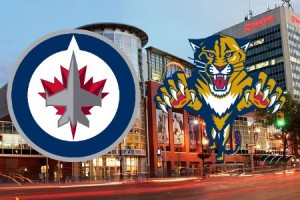 The Story: Home sweet home. Yes, the Winnipeg Jets are finally back home after a lengthy seven game road trip that saw them take eight points out of a possible 14 (3-2-2) and with plenty of air miles now logged, the Jets welcome the surprising Florida Panthers to the MTS Centre tonight for the second of six meetings between the two Southeast Division clubs.

The Jets ended their nearly two-week long road trip with a 6-5 overtime loss to the Buffalo Sabres Tuesday night in what can only be described as Penalty Gate. Still missing top defensemen Tobias Enstrom and Ron Hainsey due to injuries, the Jets took 14 penalties that resulted in 12 power plays and four power play goals for the Sabres. Amazingly, the Jets also gave the Sabres three two-man advantages in the game so it was really not surprising that the end result was a loss. Tuesday’s game-winning goal in overtime, scored by Thomas Vanek, came with Blake Wheeler in the penalty box serving a hooking penalty.

Despite the plethora of penalties and the Jets inability to hold a lead (The Jets blew four leads in the Sabres game; 2-0, 3-2, 4-3, 5-4) there were several positives to take away from Buffalo, as struggling centre Bryan Little scored his first two goals of the season and goaltender Ondrej Pavelec continued his strong play, making 39 saves. In addition, call-up defenseman Mark Flood scored his second goal of the season on a beautiful pinch.

Claude Noel will be looking for more discipline from his squad tonight versus the Panthers, who are coming off of a 5-1 rout of the Toronto Maple Leafs two nights ago, a game in which five different players scored goals.

The Panthers currently sit in 7th place in the Eastern Conference and have the fifth-best power play in the NHL. Led by newcomers Kris Versteeg, Tomas Fleischmann, Tomas Kopecky and Brian Campbell, the Panthers have displayed a more potent offensive attack under the tutelage of head coach Kevin Dineen.

Jose Theodore will start his third straight game in goal for the Panthers, who are 1-0-3 in their last four games.

NOTES… The Jets play 17 of their next 23 games at home, including 12 out of 14 in December….. Jets center Ben Maxwell was placed on waivers Wednesday (0 points in four games)……It was just 11 days ago, on October 31, that the Jets beat the Panthers 4-3 in a shootout. Jets forward Evander Kane scored a controversial tip-in goal with 49 seconds left in the 3rd period to send the game to overtime where Kyle Wellwood scored the shootout winner for the Jets…. The Panthers have lost 9 of the last 13 games to the Thrashers/Jets franchise, including the loss on Oct.31…..