Both teams have won their last game as the Jets were winners on Tuesday in Colorado and the Kings beat the Hawks in Chicago last night.

The last time a Kings team played in Winnipeg was also the last regular season game in the history of the Winnipeg Jets 1.0 back on April 12th, 1996. 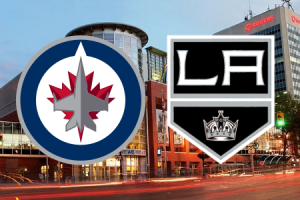 The Winnipeg Jets will try to close out 2011 with wins against the visiting Kings and Leafs.

The Jets defeated the Colorado Avalanche on Tuesday night 4-1.  Winnipeg continued their ability to finish off tired teams playing in the 2nd game of a back-t0-back as despite the high altitude, they had excellent performances from Ondrej Pavelec and Evander Kane to lead this team to their first road win of December (of course they only played 2 games this month).

Heading into tonight’s game, the Eastern Conference standings continue to be close. The Jets currently sit in 8th place with 39 points.  They are two points back of 6th place New Jersey Devils but are just 4 points up on the 12th spot which is currently held by the Montreal Canadiens.

The underachieving Los Angeles Kings are coming from the Windy City where they defeated the Chicago Blackhawks 2-0 last night behind a strong effort of goalie Jonathan Quick.  This team has scored the least number of goals in the Western Conference although they also don’t allow a lot of pucks past their tenders (tied for 4th lowest in West).

The Jets have shown a penchant for closing out teams that are playing game 2 of a back-to-back so it will be interesting to see if they can finish off a tired Kings team.

We will have the projected line combinations for the Jets/Kings for tonight’s game following practice at the MTS Centre.

These could change depending on whether Jim Slater is good to go.

Mason is getting the start.

Los Angeles Kings:   Scott Parse (hip) is expected to miss the remainder of the season.  Simon Gagne (upper body) is listed on IR.

QUICKIES…..The last time a Kings team played in Winnipeg was also the last regular season game in the history of the Winnipeg Jets 1.0 back on April 12th, 1996.  The Jets won 5-3 and Keith Tkachuk scored his 50th goal of the season into an empty net.  Before the MTS Centre became one of the loudest buildings in the NHL…we had the old Winnipeg Arena and it was rockin for the last ever regular season home game.  The #1 star that night – Winnipeg Jets Fans.