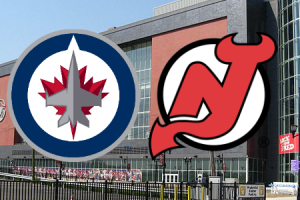 The Story: Celebrate and then go back to work.

The Winnipeg Jets ended a three-game losing streak last night with a 2-0 road victory over the Ottawa Senators but that is yesterday’s news as the Jets will look to start a winning streak of their own tonight when they visit the New Jersey Devils.

The Jets and Devils played just three nights ago in Winnipeg, a 2-1 come-from-behind Devils win that at the time handed Winnipeg their fifth loss in six games. Tonight will be the third game in four nights for the Jets, who are in 10th place in the Eastern Conference with 47 points, three points behind the Pittsburgh Penguins, who hold the 8th and final playoff spot.

Tonight’s game will also be the fourth and final meeting of the season between the Jets and Devils. The Devils lead the season-series 2-1 but all three games have been close. The Devils needed overtime back on November 5th to beat the Jets 3-2 and the Jets won 4-2 back in early December in a tightly-contested game. In fact, each team has scored seven goals in the three head-to-head meetings which is reflective of how close these two teams have played each other.

The Jets will not have forward Blake Wheeler for the second game in a row tonight. Wheeler took a Petr Sykora shot in the throat during Saturday’s contest and did not travel with the team to Ottawa for last night’s game.

Jets goalie Chris Mason earned his second shutout in three starts last night but it is not yet known if Jets head coach Claude Noel will go back to Mason tonight or will opt instead to start Ondrej Pavelec. With Monday’s win, Chris Mason’s record improved to 6-3-0 on the season. Mason has a 1.99 goals against average and a .923 save percentage.

Who’s Next: After tonight’s game the Jets return home for two games on Thursday, January 19th against the Buffalo Sabres (7:30 p.m. CST) and on Saturday, January 21st against the Florida Panthers (7:00 p.m. CST).

QUICKIES….. Evander Kane has not scored a goal in nine straight games….. Chris Mason has 23 career shutouts…..Jim Slater has won 60 short-handed face-offs which is 17th best in the NHL…..Join The Illegal Curve Crew at The Cheer Bar & Grill (Osborne and Stradbrook) tonight for the Jets/Devils game…..The new Illegal Curve 5950 fitted hats are now available for sale at City Haul (823 Corydon Ave.)…..